Apple has a new goal to accomplish: end mining and use only recycled materials 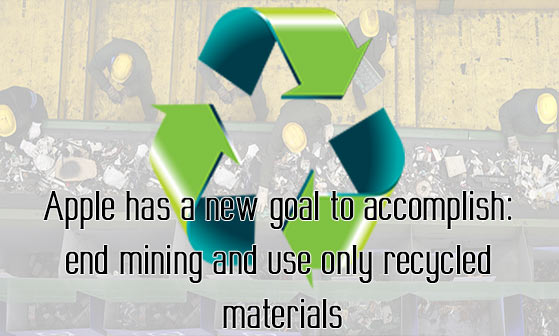 Apple recently released its 2017 Environment Responsibility Report just ahead of Earth Day, where the company stated that it is going to totally end its dependency on mining. Though Apple supports many sustainability and recycling programs in technology, it still uses plenty of metals and toxic rare-earth materials from the ground to manufacture its products. So, it is working to shift to a closed-loop supply chain eventually, which will allow it to stop mining the earth and use recycled metals and rare earths.

The major reason stated for the shift is the effect that electronics manufacturing is having on the planet. Apple cites in the report, “Climate change is undeniable. Earth’s resources won’t last forever. And technology must be safe for people to make and use. We don’t question these realities – we challenge ourselves to ask what we can do about them in every part of our business.” The challenge is going to be tough, and the company admits that it hasn’t completely figured out how it’s going to achieve it.

Earlier, Apple had faced conflicts due to its reliance on tin and cobalt mined from Congo and nearby areas for lithium-ion batteries. Therefore, the use of recycled materials is, in a way, preventing human right abuses and child labor. The company is experimenting ways to recover cobalt from its batteries and is already using tin recycled from the main logic board of its devices. And as more consumers are encouraged to return their iPhones while upgrading to a new handset, Apple hopes to boost up its recycling capabilities to power its progress through renewable energy.