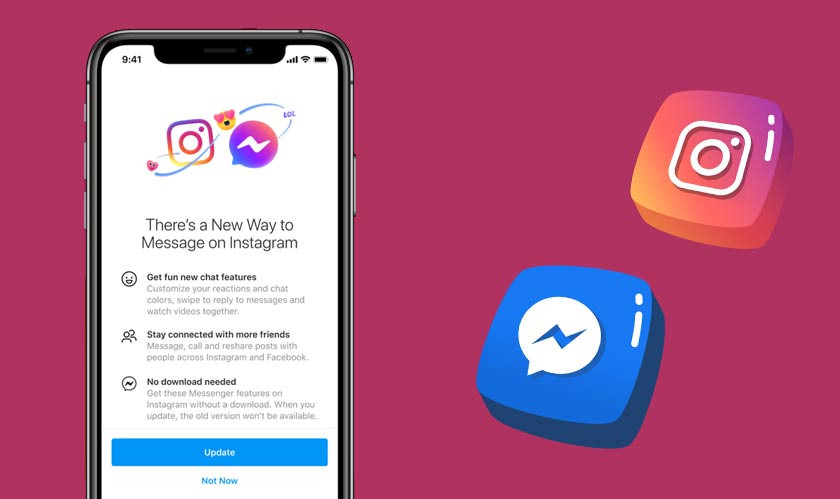 Facebook has long been trying to integrate all its acquired platforms into a single entity. Instagram and WhatsApp both have got a few common features in the past. WhatsApp has had the ability to cross-post stories on Facebook for a long time now. Now the long-awaited integration of messenger and Instagram DMs is rolling out. Users are already getting notifications of the update in their DMs. They have the choice to update or postpone it for the future. However, this time around, Facebook has brought interesting new features to the updated interface, to lure the customers into updating and integrating their Instagram and Facebook.

Updating to the new app will allow users to send messages to users across both the platforms seamlessly by using either app to send messages and join video calls. The new update allows you to watch videos on Facebook Watch, IGTV, Reels, TV shows, movies, and more with other users during a video call. Facebook has also introduced a Vanish Mode, similar to Snapchat’s chat service, which deletes all the messages after they are seen or when you close the chat.

The selfie stickers provide a new way to react to messages, which is a hybrid of Boomerangs, emojis, and selfies.There is also a custom emoji reaction, which lets you create a shortcut of your favorite emojis to react quickly to a message. Like WhatsApp, you can also forward a message with up to five friends or a group at once.

The long-awaited feature of responding directly to a specific message has also made its way to the newly updated app. The new account center also allows you to decide who can message you with updated privacy settings. You can also report full conversations or single messages. The newly updated app will also proactively send blocking suggestions across Instagram and Messenger for suspicious accounts.