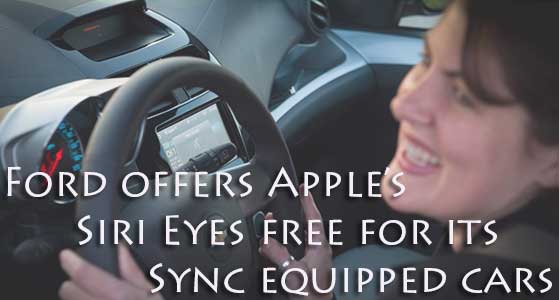 Owners of iPhones and Ford cars equipped with the Sync infotainment system now can tap into Siri to perform a variety of tasks while keeping their eyes on the road. Ford announced the Siri Eyes-Free update, noting that the software is available for more than 5 million Sync-equipped vehicles. With a connected iPhone in the car, Siri Eyes Free will work with the Ford Sync software to help drivers make and receive phone calls, listen to music, get driving directions and check calendar appointments via voice commands.

Silicon Valley companies are increasingly looking to cars as a place to embed their technology. Carrying over their rivalry from the smartphone market, both Apple and Google offer software designed to help owners control in-car entertainment systems, make hands-free calls, check email and keep tabs on the traveling route. Looking farther down the high-tech road, companies including Google, Tesla Motors and even ride-hailing service Uber have plans for fully self-driving cars, which could become a reality for consumers as soon as five years from now. Sync has gone through three versions since its inception in 2007. The third version already includes Siri Eyes-Free, which incorporates the voice activated Siri digital assistant found in Apple's iPhones. Thursday's update is geared toward the second version of Sync, known in North America as MyFord Touch, which was introduced with Ford's 2011 lineup. The Sync system is currently installed in more than 12 million vehicles, according to Ford.

"Sync, Ford's entertainment and communications system, was designed to be flexible and updatable, just like other mobile technologies, so our customers are able to get the most out of their smartphones while behind the wheel," Sherif Marakby, director of Ford Electronics and Electrical Systems Engineering, said in a press release.

As a simple software update, Siri Eyes-Free provides a convenient way for drivers to get new features. But many Ford owners are waiting for the automaker to equip new vehicles with Apple's CarPlay, a more advanced, higher-end system that offers touch-screen controls, onscreen maps and a built-in media center. A Ford spokesman confirmed that the automaker plans to support both CarPlay and Google's Android Auto with Sync version 3 but could not give a specific time frame for availability. Users can download the update from the Ford owners website, install it on a USB drive and then plug it into the USB port in their cars. The Sync touch screen then walks the user through the installation, which takes around 20 minutes