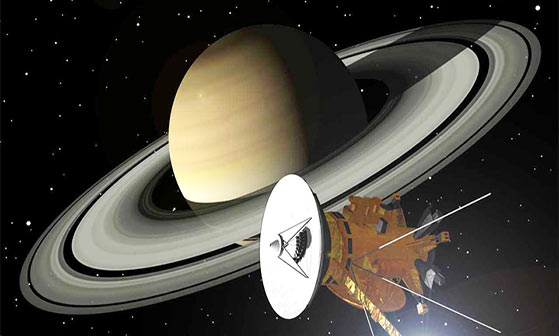 NASA’s Cassini, the unmanned spacecraft, is heading towards its final act of probing into the perilous territory between Saturn and its rings. The spacecraft was launched in 1997 and reached Saturn in 2004 and has helped scientists to explore the Saturn system since then.  Its lander, Huygens, separated from the spacecraft and landed on Titan (Saturn’s moon) in 2005. It led to the discovery of the chemistry occurring in its upper atmosphere which could eventually lead to habitability.

After a short while, Cassini detected hydrothermal activity on the sea floor hidden beneath Saturn moon Enceladus’ icy shell. But now, the spacecraft is running out of fuel and in its final days, it will move into a new orbit that will pass through Saturn’s cloud tops and its rings. It will make 22 weekly dives in the region previously unexplored by any spacecraft. And in its final orbit, Cassini will destroy itself by flying into Saturn’s crushing atmosphere.

As Cassini plunges past Saturn, it will send back information regarding Saturn’s gravity and magnetic fields and the internal arrangement of the planet. This could possibly help in figuring out the origin of the rings and the chemical composition of other materials in the rings. The destruction of Cassini ensures that any existing Earth microbes don’t contaminate the moons for future study. Jim Green, NASA’s planetary science division director said, “What a spectacular end to a spectacular mission. I feel a little sad in many ways that Cassini’s discoveries will end. But I’m also quite optimistic that we’re going to discover some new and really exciting science as we probe the region we’ve never probed before.”