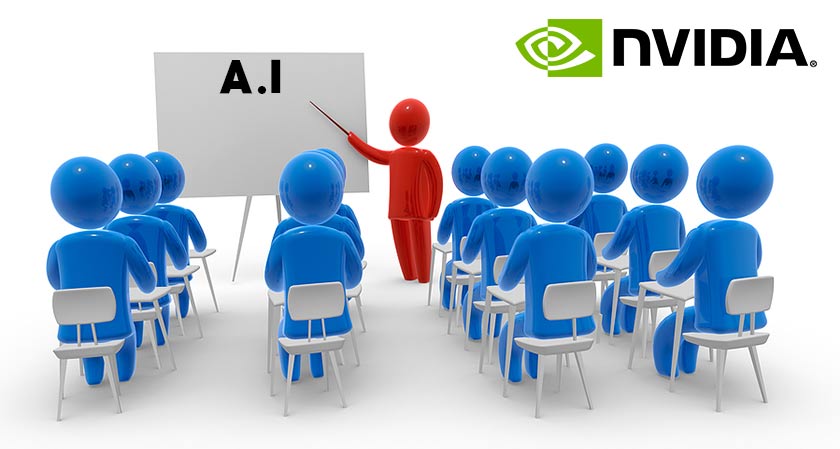 NVIDIA is betting big on AI and is pulling out all the stops to train developers to make use of this technology. At the GPU Technology conference held in San Francisco, NVIDIA announced that they would be training 100,000 developers on AI technology through its Deep Learning Institute by the end of this year. That is a tenfold increase from last year's 10,000 which goes to show how serious NVIDIA is about AI technology. The increase comes due to the surging demand for expertise in the field of AI.

"AI is the defining technology of our generation," said Greg Estes, vice president of Developer Programs at NVIDIA. "To meet overwhelming demand from enterprises, government agencies and universities, we are dramatically expanding the breadth and depth of our offerings, so developers worldwide can learn how to leverage this transformative technology."

According to the analyst firm IDC, 80% of all applications will have AI components in them by 2020. The Deep learning Institute provides developers, researchers and data scientists with practical training on the use of AI tools and technology. The institute has trained developers at companies like Adobe and SAP and also in Government institutions like U.S. National Institutes of Health, Barcelona Supercomputing Center and Indian Institute of Technology Bombay.

This time around it has collaborated with many partnering companies to provide training on the applied uses of deep learning in healthcare, web services, robotics, video analytics and financial services. The course content is being delivered online with NVIDIAGPU's in the cloud using Amazon Web Services and Google's Qwiklabs, to reach developers across the world.

"There is a real demand for developers who not only understand artificial intelligence, but know how to apply it in commercial applications," said Christian Plagemann, Vice President of Content at Udacity. "NVIDIA is a leader in the application of deep learning technologies and we're excited to work closely with their experts to train the next generation of artificial intelligence practitioners."

NVIDIA has teamed up with Udacity to provide Deep Learning Institute content for the development of self driving cars. NVIDIA is also working with Microsoft Azure, IBM Power and IBM Cloud teams to port lab content to their cloud solutions.