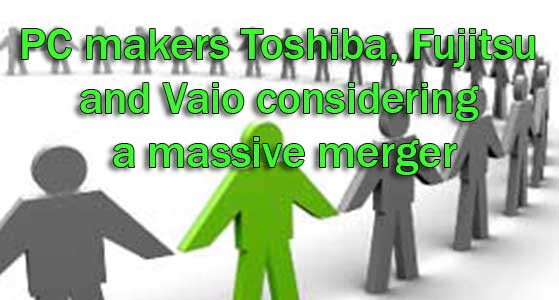 Toshiba Corp., Fujitsu Ltd. and Vaio Corp. were reported to be in talks on consolidating their personal computer businesses. A merger would create a behemoth with a commanding share of the domestic market. It would also represent a significant restructuring in the struggling industry, although its global impact may be small.

Analysts said the benefits of a tie-up are clear because the three PC makers have been looking to streamline their businesses in a shrinking market. But the analysts see limited scope for greater competitiveness, given there is little room for growth. They doubt the PC titan would be able to come up with new, must-have products, although each would bring special knowledge to the table.

Scandal-hit Toshiba has been searching for a solution to its loss making PC business and Fujitsu has announced it will spin off its troubled PC arm into a separate firm. Vaio was spun off from Sony Corp. and became independent firm last year.

“With profit margins in the PC market narrowing, the market will increasingly favor the big players who have the scale to drive volume sales growth, while the smaller manufacturers will eventually be forced out of the market,” Karissa Chua, Consumer Electronics analyst said in a distributed email comment.

“The proposed integration of the three companies’ PC businesses will benefit all parties in reducing their operational losses and allow them to build up the scale to better compete against the market leaders.”

Figures provided by International Data Corporation Japan show the NEC Lenovo Japan Group had the largest share of the Japanese market last year at 26.3 percent. Fujitsu came second with 18.8 percent, while Toshiba followed with 12.2 percent. Vaio computers sell poorly and account for less than 2 percent of the Japanese market.

Since the PC market is shrinking, there is little chance that integration will dramatically improve their fortunes. The merger’s impact on the global market would be even less noticeable, as the three firms’ combined share is small just 6.4 percent of worldwide PC sales, according to Euromonitor International.

“The recent digital devices, including tablets with detachable keyboards, do not really fall into the category of PCs but pose new business opportunities. If the merged entity targets these new devices using each firm’s individual strengths, the integration would be meaningful”. Masaki Nakamura, an analyst at MM Research Institute.

Another analyst who wished to remain anonymous said if the merger happens, one potential strategy would be to push Fujitsu’s and Toshiba’s computers toward the corporate market, where Fujitsu has strong presence. Because the Vaio brand is well known among Japanese consumers, it would be more suited to the consumer market, he said.