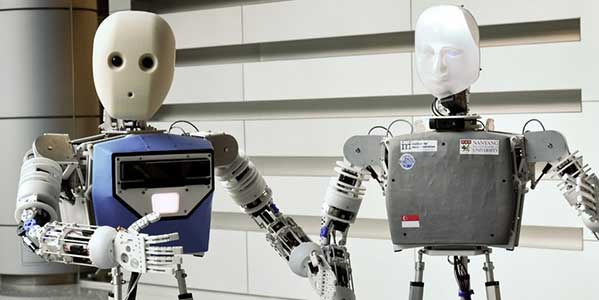 It’s most important to know how smart and experienced you are in handling robots and heavy machines, working with heavy machines is actually quite tougher, so to get this done-all you need is to have  knowledge and practice in handling robots. Basically robots work on two places -safe and unsafe zone, few robots work by its own  in full range and speed, so getting into that place is unsafe, were as on other- hand robots monitored by remote will actually helps man to reach the place, but few robots don’t operate when  it sense others presence in safe zone.

Human’s interaction in developing friendship or sharing things with robots might be quite difficult task all over, means the process making  good friendship and jolly cooperation with Robots. This is usually referred as Kooperation Zonen by the creators.

Robots are designed in such a way that it can identity people walking around in general area, robots can go in full speed and show what they are up to. Robots sense all this with the help of Fraunhofer’s model using cameras on the tracks. When robots sense something or someone moving; the whole behavior of it changes in a slower manner that exhibit human actions by lowering its arm to the proper position on where the person standing.

“Our system are already fully functional and has been tested in the lab, this year, the goal is get the trade association to test an application and enable its implementation in the industry.” said Mathias Putz- who leads research division.

When the person moves closer robots stop moving, it’s not even safer to it to move that close, when man is going to reach robot; that would be either to shut it down or mess it up with it.

Today, we see robots used almost in all industries, maintaining it is a big job for man. Something a creative idea like this can actually helps in having good understanding between humans and robots.