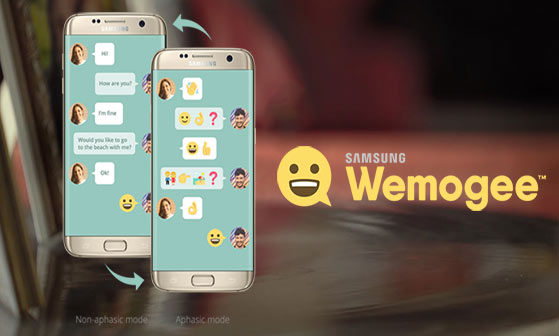 Samsung is planning to create a new app with emojis- that helps to communicate for those who are suffering with aphasia- a language-processing disorder that makes diseased finding difficult to read, write or talk.

This interesting app was created by Samsung Electronics Italia (the company’s Italian subsidiary) and speech therapist Francesca Polini, Wemogee replaces text phrases with emoji combinations that can be helping and used as messaging app or makes a direct conversation between patients. It has English and Italian languages which will be present in Android by April 28; as well this is available in iOS version for future use.

The creators of the new app have explained how these emojis are going to be helpful for Aphasia patients, “these emojis are based on chat app that is designed to enable people with aphasia to communicate.” The app has two modes: one is visual another is textual.  An aphasic user sees emojis that are arranged to communicate more than 140 phrases that have been arranged into six areas. Wemogee translates the emoji combinations into text for non-aphasic users, and then translates their responses back into emojis.

“Aphasic patients understand emojis because they depict all aspects of emotions. The use of gestures, images and facial expressions is a function perfectly preserved in understanding and often also in the production of language,” said Polini.