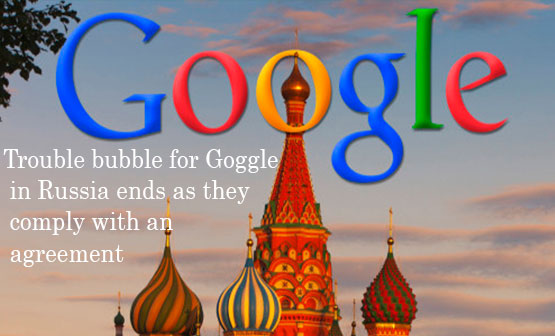 It seems Google is in deep neck trouble as Russia’s Federal Antimonopoly Service (FAS) imposed a fine of 438M RUB (~$7.8M) on it, following the antitrust ruling in September 2015. Well, the whole maelstrom story revolves around ‘breaching trust’; it seems Google required handset makers so that it can pre-load Google apps and services so that customers can gain access to Google Play Store application, but it  tried to disdain the Russian search rival Yandex, leading Yandex to file against Google for violating local competition rules.

But witty as a fox, Google has found a way out of the court case and it seems Google has settled the case with the FAS and the deal was approved by a Russian court, and shall prolong for 6 years and 9 months.

“We are happy to have reached a commercial agreement with Yandex and a settlement with Russia’s competitor regulator, the Federal Antimonopoly Service (FAS), resolving the competition case over the distribution of Google apps on Android,” said a Google spokesperson.

As per the terms and conditions of the agreement, Google will not operate its application singularly on android devices in Russia, and as such will not restrict the pre-installation any competing search engines and applications. And in addition, it states that Google will no longer needed to be pre-installed as the sole search engine, and it will no longer enforce its prior agreements to the point where handset makers might agree to any such terms.

The deal also allows other Russian search engines and applications can make its way on android devices in Russia.