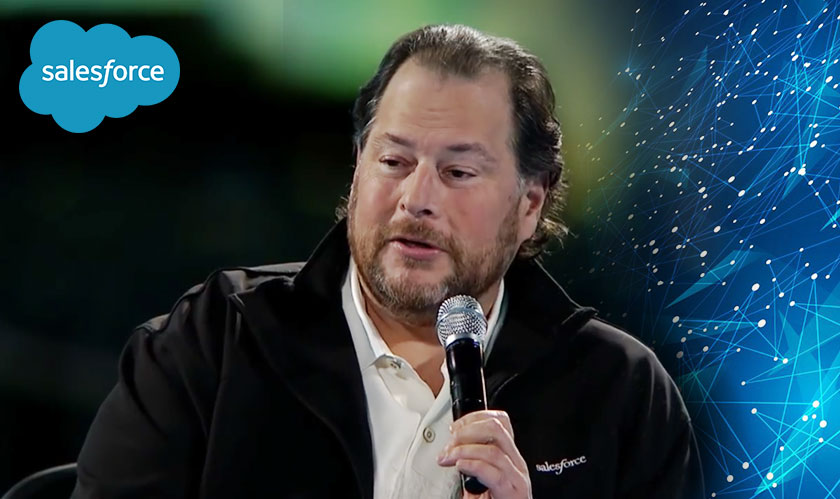 World’s largest Enterprise Software Providers Salesforce has said that it is interested in providing blockchain and cryptocurrency solution later this year. Marc Benioff, Chief Executive Officer of Salesforce along with co-founder Parker Harris commented on the company wanting to get into Blockchain solutions at a conference recently.

Marc Benioff said that he would be hoping to release the product in time for Salesforce’s annual Dreamforce Conference. “I hope by Dreamforce we will have a blockchain and cryptocurrency solution,” Benioff said. Although his words did not indicate any specific details of the product he said: “I kind of see what it looks like and what it could be”. His plans were not just theoretical but concrete.

“I had been thinking a lot about what is Salesforce’s strategy around blockchain, and what is Salesforce’s strategy around cryptocurrencies and how will we relate to all of these things,” Benioff said. Benioff says he had been contemplating the implementation of blockchain solutions and on how the company could get into the blockchain industry. Benioff says that he got the idea for implementing blockchain after a chance meeting with an unnamed executive during the World Economic Forum in Davos 2018. The more he thought about the idea, more he started liking the idea of Salesforce gaining from the usage of blockchain.

Blockchain is an electronic ledger that tracks the digital currencies. Salesforce is the global leader when it comes to providing Enterprise Resource Planning Solutions but it is still unclear how it would implement Blockchain on its platform. The product could be as simple as incorporating payments for cryptocurrencies into its current Commerce Cloud Divison or it could be complex such as a smart contracts system from crowdfunding or business development.

The CEO believes that implementing blockchain within Salesforce’s existing services would improve the customer experience and also improve the company’s portfolio of existing products. Benioff has been paying close attention to the happenings around the cryptocurrency industry for a while. He has been known to say that blockchain technology can become the focus of future of technology.

The CEO of Dapps Inc, Vikal Kapoor also said: “When blockchain can integrate seamlessly with Salesforce’s current technological infrastructure, it can significantly improve the user experience.” Dapps Inc. is the enterprise blockchain company for Salesforce customers. Further, he said “Imagine marketing, finance, production, and procurement all working in concert to exceed customer expectations.” touting the move by Salesforce being a revolutionary one.