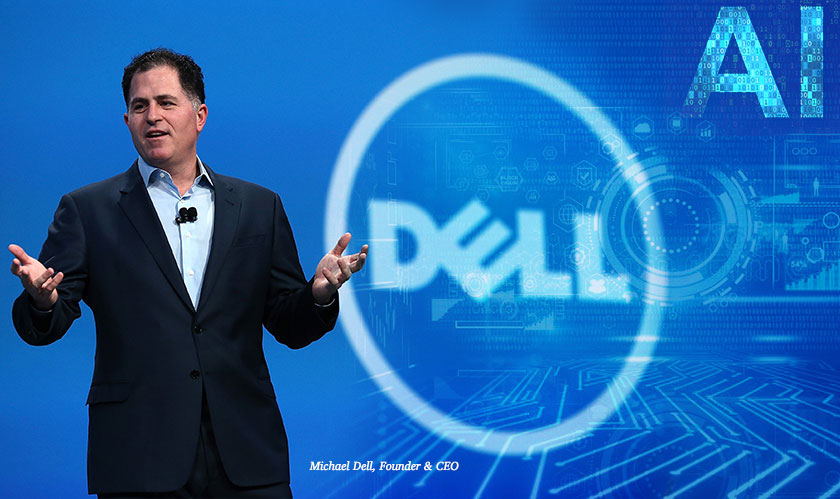 Michael Dell, founder and CEO of Dell Technologies, is an optimist when it comes to the world full of sceptics. Mr. Dell loves the idea of human beings working in collaboration with the machines. “I love this idea of human-machine partnerships because in my mind it’s always been very clear,” Dell said. “It’s not about humans or machines, it’s about humans and machines.” He thinks the world is dividing humans and machines, but instead it’s about both working together to usher the future together.

“AI is your rocket ship, and data is the fuel,” said Dell. “To be competitive in the future, you’ve got to use software and data and artificial intelligence and the Internet of Things, and you’ve got to do it at record speed and scale.” He believes to survive we must innovate to be competitive in the market. Software, the usage of AI and IoT together will bring up the evolution faster and at the bigger scale. AI in this context he describes will work as a rocket ship where data is its fuel.

Dell has hundreds of projects that are associated to AI and its contributions are noticeable in their products. “If you’re not using AI with your data, you could be out of business real soon,” he said. The amount of data is only going up with times “Average city by 2020 will produce 200PB of new data per day” notes Dell’s founder. More and more devices are connected; hence AI is pivotal in enabling companies to process data at huge proportions.

Michael Dell is one of the voices that has downplayed the fears of “robocalypse” instead he plays it up saying it will improve people’s lives and the world cannot turn away from it. “AI is really bad, we shouldn't have AI' -- that's nonsense. We have to figure out how to use it in a responsible way, that's our job.” He believes there is no way around AI being integrated into our lives. Instead we should work out a solution so that we figure out a responsible way to use AI.

“These are powerful tools, but that's really all they are,” he said. Although AI is a very powerful tool, it is upon us to harness its power in the right way. Technology has always been the by product of human thinking, hence the way forward must be dictated by the same. As they say, with great power comes great responsibility.