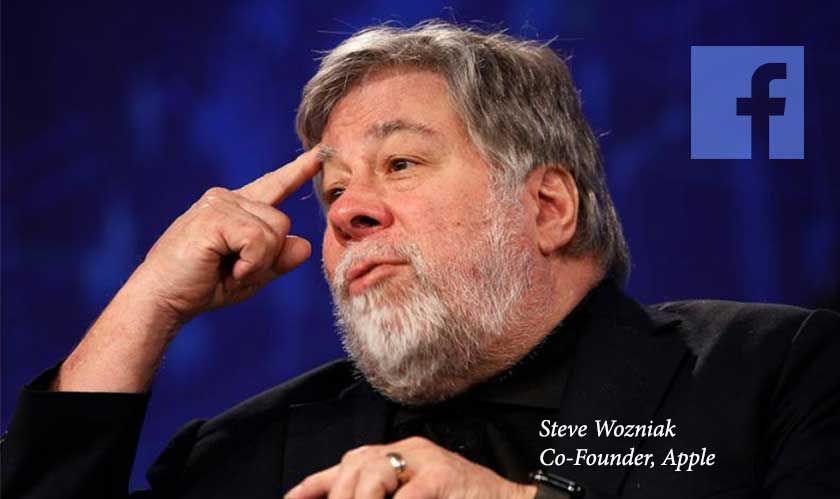 Apple co-founder Steve Wozniak has warned people to quit Facebook. In this digital age, data protection has become the most important issue to be addressed. The technology so many of us have embraced is actually working against us. “There are many different kinds of people, and some of the benefits of Facebook are worth the loss of privacy, but to many like myself, my recommendation to most people is – you should figure out a way to get off Facebook,” Wozniak told TMZ tabloid.

“Who knows if my cellphone is listening right now, people think they have a level of privacy but they don’t. Why don’t they give me a choice? Let me pay a certain amount, and you’ll keep my data more secure and private than everybody else handing it to advertisers,” said the 68-year-old engineer Steve Wozniak.

According to Steve Wozniak, “Users provide every detail of their life to Facebook and the Facebook makes a lot of advertising money of this but the users get none of the profits. I don’t think we can stop it, though. But everything about you. I mean, they can even measure your heartbeat with lasers now; they can listen to you with a lot of devices. Alexa has already been in the news a lot,” Wozniak said.

Steve Wozniak removed his Facebook account in the month of April 2019 after the Cambridge Analytica scandal. He also said that he would rather pay for the service than have his personal information exploited for advertising. He also praises Apple for respecting people’s privacy. Steve Wozniak suggests that Facebook and its other competitors should give the option of privacy and data security to its customers.

Facebook the social media giant also owns Instagram and WhatsApp, has more than two billion users around the world. It is one of the most popular websites in this digital era but still it is facing many challenges pertaining to data privacy and data protection.

Though Facebook has many benefits when it comes to the issue of data privacy it has a lot more concerns to address. Earlier this year, Facebook CEO Mark Zuckerberg said: “A privacy-focused social networking platform and messaging platform. There’s a lot to do here.” On the changes that need to happen, he added: “Simpler platform that puts “privacy first.”