Wildlife on the wane; big data to the rescue 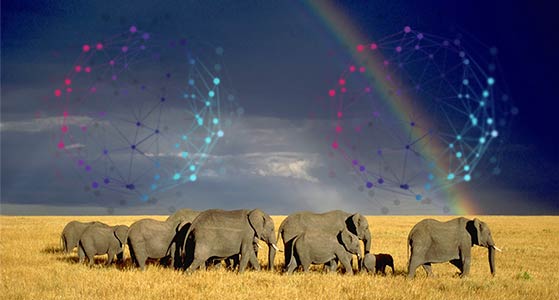 Cartoonists and artists have created so many pieces, depicting how our future generation will see the beauty of wildlife only through old photos or videos; they may not be able to actually see the diversity of the planet. Why? Because let’s face it, earth’s flora and fauna are rapidly diminishing. Rare animals are getting Extinct or declining due to man’s never ending needs and greed. Twenty or Twenty-five years from now there may not be Tigers to roar, Elephants may cease to exist and Birds nowhere to be seen.

Based on surveys of more than 10,000 populations of mammals, birds, reptiles and amphibians and fish, The Living Planet report states global populations of these vertebrate wildlife species have declined by 52% since 1970. In a time period of little more than 40 years, we have watched fish and wildlife numbers drop by more than half.

With the rise of fascinating technology, it looks like Mother Nature has some hope after all. The stereotyped idea is that, saving rare species is done in remote jungles, or scientists and people chaining themselves to trees. That is far from truth now! Today with Mind-blogging advances in science, environment analyst and ecologist can use huge amount of data collected throughout the world, to predict and understand factors affecting wildlife such as Habitat loss, climate change, and Habitat degradation. They harness Big Data and Analytics to fight illegal timber trade, poaching and other threats to the wildlife.

The challenge is to detect illegality in Global Supply Chains for wildlife, timber and fisheries, and to support efforts to drive transparency and legal trade. Illegal wildlife trade is widespread and constitutes to one of the major illegal economic activities, parallel to drug and weapon trafficking. Much of such trade impacts some of the most endangered species, forests and marine ecosystems on our planet.

Big data analytics has been channeled to uncover hidden patterns and illegality in other sectors, but the application of big data analytics for illegal wildlife trade observation, has only recently begun. The collection of massive data sets combined with complex predictive models and algorithms is creating break-through insights.

Employing Big Data in the game-plan, organizations like The Environmental Investigation Agency (EIA), is able to bag the much needed information to fight environmental crime — information that’s out there just waiting to be gathered. Big data is assisting to conjure up a more precise image of today’s eco-criminals, home in on links between seemingly unconnected criminal groups and illegal activities. With capable analytics tools and software, environmental bureaus can cover trading in the skins and bones of endangered animals, the trafficking of illegal timber, and uncover trends that were previously cryptic, or suggest new approaches for encountering the escalating worldwide onslaught on endangered species and biodiversity.

For example, with the aid of big data, EIA was able to link, so called contrast cases of trafficking of different species to a group of enterprises, thereupon identifying further connections between members of this network and other trafficking cases across different continents.

Another example is, EMC; a mammoth in data companies, it developed a software to facilitate analysis of climate and ecological data. Working with scientists at Acadia National Park in Maine, the company has developed platforms to pull in crowd-sourced data from citizen science portals such as eBird and iNaturalist. This grants the park authorities to monitor the impact of climate change on wildlife populations as well as to plan and implement conservation strategies.

Finally, a initiative that got a great deal of spotlight last year, The Great Elephant Census; it applied big data to help save the world’s biggest land beast. The two-year aerial survey, led by Microsoft co-founder Paul Allen’s company Vulcan Inc., laced the African continent. The census used sophisticated data collection techniques to count 352,271 African elephants in 18 countries-a drop of 30 percent in seven years, largely due to poaching. Highlighting the crisis has produced tangible results; the world’s largest ivory consumer, China, announced at the end of 2016 that it would end its ivory trade by the end of this year.

From these cases it’s apparent that, Big Data can tell us about the causes affecting the wildlife and can yield strategies and blueprints for preventative measures. Using the past to predict the future, we can use Big Data Analytics and valuable algorithms to savvy the situation and bring about change. Else just like in the movie Avatar, humans have to go in search for an actual Pandora, when this earth is no longer green, but all gray.