Dropbox drops its Mailbox and Carousel from its service list

Dropbox drops its Mailbox and Carousel from its service list 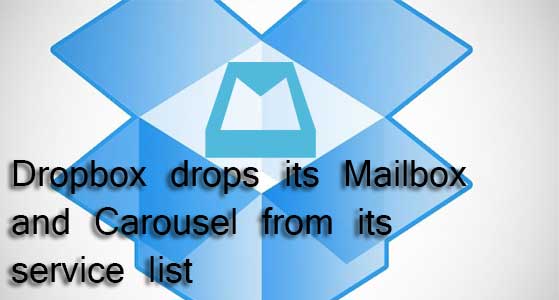 With 400 million users, Dropbox is driving profits with its file hosting and cloud  storage  services. But some of its applications aren’t panning out as expected. Dropbox is shuttering two of its services, calling it a “tough choice” as it moves toward other cloud-based innovations.

During the first quarter of next year, Mailbox and Carousel will fade into technology oblivion. Dropbox acquired Mailbox in 2013 from Orchestra, betting it could make mobile e-mail better and there was plenty of hype around the service. With Mailbox, users could swipe messages for archiving or deleting and scan conversations with chat-like organization, or "snooze" e-mails until later by tapping a button.

By adding Mailbox to its service list, Dropbox was essentially counting on luring more workers in the BYOD world to better compete with Box.com. But as it turned out, it appears to be a poor investment as Dropbox will shut it down on February 26.In 2014 Dropbox launched Carousel to create a new way for users to experience and share photos. Carousel will shut down as a standalone app on March 31. The company, though, promised to return the feature to Dropbox as part of a photo experience as well as preserve photos stored in Carousel.

“Building new products is about learning as much as it’s about making. It’s also about tough choices,” Dropbox CEO Drew Houston and CTO Arash Ferdowski said in a blog post. “Over the past few months, we’ve increased our team’s focus on collaboration and simplifying the way people work together. In light of that, we’ve made the difficult decision to shut down Carousel and Mailbox.”

The duo hinted at potential new mail services to come, revealing they would take what they’ve learned from Mailbox to “build new ways to communicate and collaborate” on Dropbox. Indeed, they pointed directly at this focus in a product called Paper, which lets teams create and work together. There is currently a wait list for an invite to Paper. We caught up with Greg Sterling, vice president of strategy and insight at the Local Search Association, to get his thoughts on Dropbox’s product closures.

“The product was acquired before it established a meaningful user base. It apparently wasn't able to break out of an early adopter user population. That's not surprising,” Sterling said. “It's challenging to get people to adopt new email apps/clients, given their investment in and the inertia around their current behaviors and applications.”