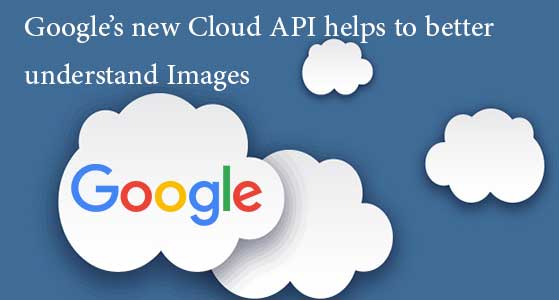 Google made an important announcement recently. The company’s powerful image recognition software that won accolades in the IT world has been made available through the release of Google Cloud Vision API. Developers can now easily build powerful applications that understand the content of images thanks to new machine vision tools released by Google.

The API known as REST uses Google’s image recognition tools that help give context to photos so that machines may understand then in the same way they understand text. Cloud Vision API classifies images into thousands of categories of recognized items, such as boats, lions, and landmarks, such as the Eiffel Tower. It also detects faces associated with common emotions like anger and happiness.

The API allows you to build metadata on your image catalog with label and entity detection that picks a dominant entity (a dog, a child) from numerous objects within the photo. Additionally, developers will be able to sort offensive content or plan new marketing and design scenarios with sentimental analysis, a sort of predictive engine for how a user will respond to a photo.

Google is releasing the API as its competitors in the cloud also try to attract developers with tools that provide easy access to advanced capabilities. Microsoft is selling access to its Project Oxford image processing APIs, and continues to roll out capabilities for those services, while IBM has made its Watson services available to developers.

The beta version of its Cloud Vision API was unveiled by the company giving select developers an opportunity to run advanced image processing services that let their applications more easily handle pictures. Applications can use the tools to do things like identify the most important thing in an image, determine how someone feels from their picture, and detect whether the content of an image is inappropriate. For example, the Entity Detection feature picks out the dominant thing in an image and tries to identify it in a way that can then be used by an application. For example, a picture of a bunch of produce would return the result "produce." Landmark Detection allows apps to identify pictures of popular natural and human-created structures, and know where on a map those structures lie. One feature in particular is useful for companies building applications that include sharing crowd sourced images. The technology that powers Google's Safe Search tool for blocking inappropriate content is now available to developers through the Safe Search Detection feature.

Right now, the Cloud Vision API is only available to approved users. Developers can fill out a form here to request access to the tools, though they'll have to lay out what they plan to do with them.