Huawei announces HiLink platform and LiteOS to integrate into IoT

Huawei announces HiLink platform and LiteOS to integrate into IoT 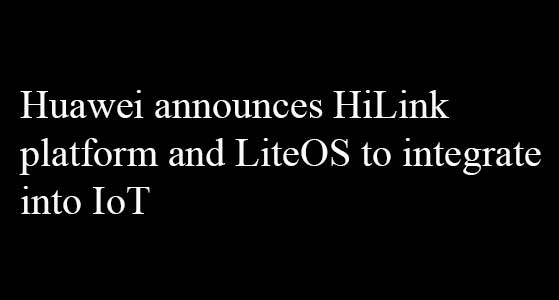 Huawei has announced its foray into the Internet of Things (IoT) or smart appliances business with the launch of its HiLink protocol and Huawei LiteOS which will be released in the second quarter of 2016. It has partnered with Chinese home appliances maker Haier as well as Chinese home solutions provider Broadlink for the same. Huawei itself will not be making IoT devices, but will provide a framework for efficient communication between the IoT devices. These announcements were made on the sidelines of its Honor brand completing two years.

Huawei Honor President George Zhao also mentioned that in order for the devices to communicate with each other, the company would be releasing the Huawei LiteOS which will be an open source OS. According to Huawei, this OS will have a light kernel (which is a fourth of the currently used IoT kernels), a fast startup time and it will consume minimal battery.
These IoT smarthome devices will be released by partners that Huawei has tied up with, first in China by Q3 2016. Huawei said that it will also enter the smart security and smart lighting devices by Q4 2016.

According to Broadlink CEO Jerry Liu, using the HiLink system, Broadlink will be able to convert any traditional appliance or product into a smart product within two days.
Launching of these HiLink housing IoT devices in India will take time. According to Huawei representatives the focus on India is on the Honor smartphones business at the moment. Huawei will be releasing the Honor 7i and Honor 5X in India soon.

“In China, partners such as Haier and Broadlink already have a lot of users so that gives us a good base. It’s easy for us to connect with these brands and integrate our smart home platform. For India right now we want to focus on the smartphones first. We want to increase our user base. Once users are comfortable with our OS and our products, and then we can think of getting into smarthome products,” said Huawei representatives. Huawei stressed on the fact that it will not be making appliances themselves but will strategically be looking at partners who have a respectable user base. Apart from Haier, some of the other partners include Panasonic, Daikin, TCL and others.