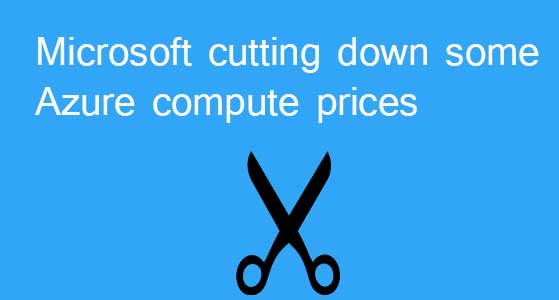 Businesses using Microsoft’s Azure Cloud Platform, gets good news as soon their infrastructure bills may be shrinking. The tech giant ‘Microsoft’ announced that it will be permanently reducing the prices for its Dv2 compute instances by up to 17 percent next month, depending on the type of instance and what it's being used for. the users will witness greatest saving if they’re running higher performance Linux instances-up to 17 percent lower prices than previous. Windows instance discounts top out at a 13 percent reduction compared to current prices.

As exact details of the discount are a little bit unclear, Microsoft says that it will publish full pricing details in February when they go into effect. Dv2 instances are designed for applications that require more compute power and temporary disk performance than Microsoft's A series instances.They're the successor to Azure's D-series VMs, and come with processors that are 35 percent faster than their predecessors. Greater speed also corresponds to a higher price, but these discounts will make Dv2-series instances more price competitive with their predecessors. That's good news for price-conscious users, who may be more inclined to reach for the higher-performance instances now that they'll be cheaper.

The price changes came just after Amazon introduced scheduled compute instances, which let users pick out a particular time for their workloads to run on a regular basis, and get discounts based on when they decide to use the system. It's a system that's designed to help businesses that need computing power for routine tasks at non-peak times get a discount.