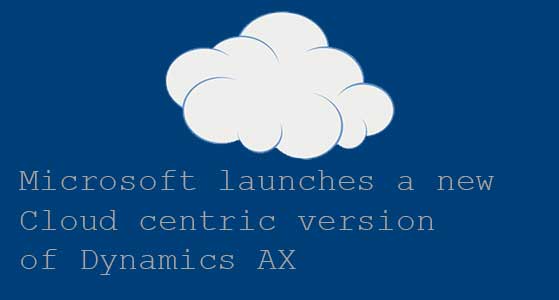 ERP software has been around for years. Almost all major IT firms have their own versions of ERP. As enterprises are fast adopting cloud computing in their business, the need also rose for cloud integration in ERP.

Microsoft Corporation recently announced the next version of its flagship ERP solution, Dynamics AX. The software differs from its predecessors by being a cloud centric version and by borrowing heavily from the consumer side of technology, including a browser-based, HTML5 user interface.

Dynamics AX taps Cortana, Microsoft's voice-commandable personal assistant, along with Azure Machine Learning for near real-time analytics through Power BI. "Most ERP customers remain on older releases and may not have plans to upgrade anytime soon, but, like its competitors, Microsoft needs to show it has a future vision for Dynamics AX -- and its ERP product lines overall," said Chris Kanaracus, managing editor and principal analyst with Constellation Research, via email.

Customers will have the option of running hybrid deployments. "You can imagine some Dynamics customers continuing to run their core financials on-premises while choosing the new cloud version of AX for areas such as HCM." said Kanaracus.

Dynamics AX is designed to offer a guided user experience that looks and works like Microsoft Office and can easily share information with tools such as Office 365 and Power BI. With its browser-based client, it's available across platforms and devices; a Windows 10 Universal App will deliver the same HTML5 experience, as will apps for iOS and Android.

“A new feature called Task Guides can help users via on-screen guidance. Essentially, a recorder in the user interface can record business processes”, explained Pepijn Richter, Microsoft's director of product marketing for ERP, in an interview on Tuesday. Those processes are then captured in an XML file and stored in a library for later reference.
"Whenever users need to use processes that they don't use every day, they can pull out the Task Guide and the system will guide them," Richter said. "It's a way to be compliant and productive." Cortana makes it possible to interact with the system using voice commands.

"I think this cloud-first approach was partly taken so Microsoft could use AX to further prove out the viability of Azure for mission-critical apps like ERP," Kanaracus suggested. "It was important for Microsoft to do this sooner rather than later."
A public preview of Dynamics AX will arrive in early December, with general availability of a regularly updated cloud version planned for the first quarter of next year. Subscription-pricing details will be announced next month. An on-premises offering will arrive later in 2016.