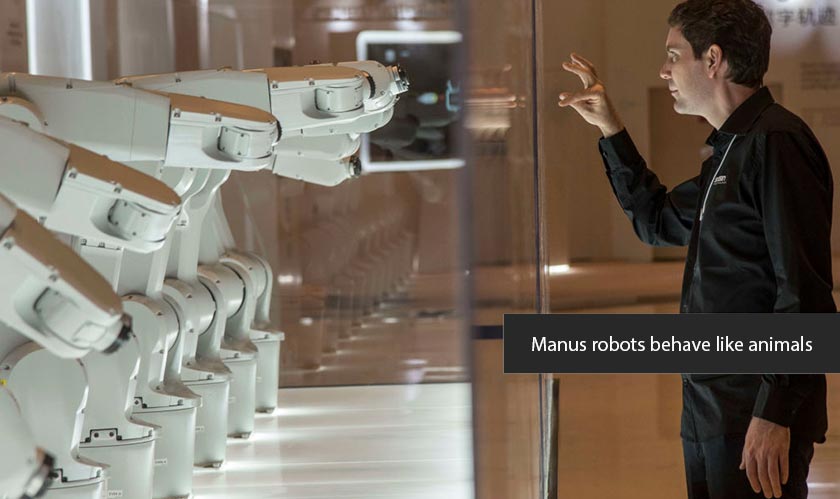 Over the past few years, renowned Artist and Coder Madeline Gannon, has been exploring on how humans relate to robots. Her study specializes on how robots communicate using their mechanical body language reacting to our presence.

Her latest piece, called Manus, is a set of ten industrial robots programmed to behave like a pack of animals. It is Gannon’s third project in robotics – projects trying to understand body language as a means of communicating with robots. “Robots in Manus, don’t look like or act like us. However when these machines broadcast a range of primal emotions, they can still connect with us in meaningful ways,” she said.

Each robot, shaped like an arm, can move independently even though they share the same central brain. And hence, “instead of acting in isolation they have intertwined behaviors that ripple through the group as people walk by,” she said, talking in an interview. These robots can track passerby and respond to their movements with the help of depth sensors which gives them a “worm’s eye view” of the world.

The robots are also programmed to make judgments on who to pay attention to; it ranks people who hung around longer higher than those who just arrived.

“We are living in a golden age of robotics”; potentials and promises that are at least half-a-century-old are finally coming to vision, and “robots are leaving the lab to live in the wild with us,” Gannon notes. She envisions “a more harmonious future between human and machine” through such a trained pack of robots with animalistic behavior.