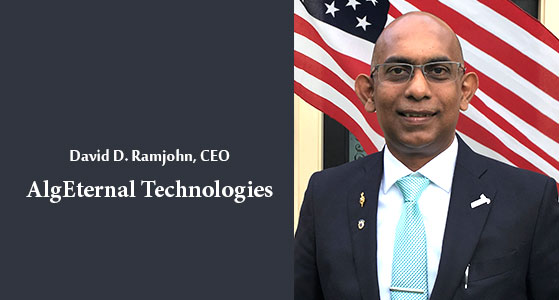 Planet Earth cannot support the exponential growth of human production and consumption with the resulting damage to the environment. AlgEternal Technologies, believes that harnessing the planet’s primary producers, microalgae, can reverse these impacts while efficiently generating sustainable environmental, social and economic benefits. AlgEternal Technologies uses microalgae as a sustainable alternative to fossil hydrocarbons, recognizing that the world must find another economic platform that keeps Earth hospitable to life as we know it.

Leading this unique and innovative company is David D. Ramjohn, the CEO of AlgEternal Technologies. Under his tenure AlgEternal completely restructured and vertically integrated around their patented core technology, the Vertical Growth Module™ (VGM™) PhotoBioreactor (PBR) for growing microalgae at scale.

Let’s hear more about the company and his role as the CEO in a conversation with him.

Firstly, you must have faced certain hurdles as the CEO initially. Tell us about it.

Lack of resources. In my first run as CEO of a company, I attracted new business partners and got approval for a $10 million loan for an algae project. I left that company to join AlgEternal knowing AlgEternal had great potential but that I would have some heavy lifting to do; little did I know that I would have to do the work of both a founder and a CEO! I have to find the resources and do my job simultaneously. When you take your responsibilities as seriously as I do, you carry the burden of what happens if you fail; not what happens to you-but what happens to the people who rely on you: your team members, your investors, future generations, and your family.

You have adopted the principles of Conscious Capitalism. Can you elaborate?

I adopted the principles of Conscious Capitalism, the movement originated by John Mackey and Raj Sisodia, because I believe in the ideal that business can be conducted in a manner that elevates humanity. We have a purpose, to show the world that microalgae can be the platform that provides the same or better economic, environmental and social benefits for this and every other generation henceforth. We know that AlgEternal will have not just financial success, but also leave a lasting legacy of which we will be justifiably proud and for which future generations will be thankful.

Under your leadership, AlgEternal has witnessed immense growth. Tell us more about your company.

Initially, AlgEternal was created to sell its VGM growth technology to other industry users. Fortunately, every other algae company believes that its growth platform is the best so no one was buying AlgEternal’s technology. I say fortunately because this meant that the Intellectual Property never got into the open. One of the conditions I had was that we stop selling the VGM technology, using it instead as the core of the business model that I developed, to go from raw algae biomass to finished products.

We now produce two algae-based products with sales in two distinct vertical markets: natural skin care and soil amendment. When I was made CEO, AlgEternal was dormant, out of capital, with zero production capacity, without a viable way forward. Since 2016, with support from investors and the incredible team at AlgEternal, we turned things around with our new AlgAllure® AlgaRiche® Skin Care Collection containing PhycoDerm®, and our Agtivate™ Soil Amendment. We stand ready now to go after the major capital investment needed to take AlgEternal to the next level.

Why is keeping this technology alive so important to you?

Microalgae applications can fundamentally solve many of the apocalyptic challenges facing humans. But the microalgae industry will never succeed if it isn’t profitable. A rate-determining step for algae-based business is producing algae at commodity scale, the way we produce corn, wheat, rice, etc. Algae can be a major sustainable economic platform transitioning to a post-petroleum world, crucial to keeping Earth hospitable to us. AlgEternal’s VGM technology solves the problem of growing almost any microalgae at commodity scale. Added benefits include: low capital and operating costs relative to other PBRs; recycling over 95% of water used; reliability of production;and very low contamination rates. If AlgEternal fails then the industry loses a major champion that could demonstrate to the rest of the world that microalgae could be done successfully as a business. We cannot allow that to happen.

As an organization gets larger there can be a tendency for the “institution” to dampen the “inspiration.” How do you keep this from happening?

At AlgEternal we check-out egos at the door. I instill this in every team member and every leader that I mentor within the company. Our people are our greatest resources; we encourage their taking ownership, showing initiative, and contributing ideas for innovation and improvement. Providing communication channels, facilitating open dialogue, and recognizing excellence are indispensable to maintaining high motivation and inspiration levels.

Where do you see the company expanding or focusing its efforts in the coming years?

Our immediate concern is attracting nine million dollars in Series A investment to scale to commercial production, execute our marketing strategy, build out our facilities, get certifications e.g. FDA, and hire the necessary personnel. Over the next five years we focus on increasing production and revenue from our two products: the AlgAllure® AlgaRiche® Collection and Agtivate™. I will continue working as a Director of the Algae Biomass Organization, representing the best interests of the industry and catalyzing entrepreneurship—without which the industry will never take off, and on the Industry Advisory Board of the University of Houston to support and facilitate the success of the entire algae industry.

A citizen of Trinidad and Tobago, David D. Ramjohnleads AlgEternal Technologies, LLC (AET). He operates AET with an ecocentric approach to satisfying human needs through sustainable economic activity while reducing dependence on petroleum hydrocarbons for non-fuel products. David has adopted the principles of “Conscious Capitalism”, operating AlgEternal in a manner that elevates all humanity. He’s also on the Board of Directors of the Algae Biomass Organization and a member of the Biotechnology Industry Advisory Board, University of Houston’s College of Technology.