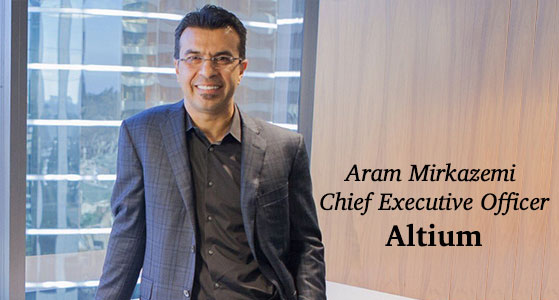 Printed circuits have been around since the 1950’s. Transcending time, Printed Circuit Boards (PCB’s) have become the most important component of electronics. The immense integration of electronics due to the IoT push will keep ushering the PCB industry to further prosperity. To fulfill the growing requirements though, the industry will require PCB design engineers and the PCB engineers will need design software that will help them create printed circuit boards that are optimal in design. Altium has been developing softwares to help design high-quality PCB’s for more than thirty years now.

Founded in 1985 by Nick Martin, Altium is an American, Australian-domiciled public software company that provides tools for electronics design for the engineers. Altium was founded in Hobart, Australia under the name Protel. Altium was one of the first companies that provided PCB design tools by implementing the modern technologies. With their annual sales being $100.4 million and $93.6 million in generated revenues last year, they have eventually become the market leaders in this space.

The product consolidates all the tools that are required by the engineers into a single unit that has a stress-free user interface. This rapidly increases the rate of the design success and reduces the overall design time. Over the last thirty years, Altium designer has grown from being used at the grassroots, to now the most widely used PCB design tool in the market. It provides a Truly Unified Design that links all the features of the PCB design process. Altium Designer helps to migrate from competitors’ toolchains with the most potent translation tools in the industry.

Altium Vault works in tandem with the Altium Designer to manage design data with great integrity. Altium Vault provides secure storage for data generated from board design and helps manage all other sets of data obtained from the Design Area by running specific release processes. The work environments of the designers working on a particular design can be controlled via the Altium Vault.

Altium’s TASKING is a compiler technology that is used all over the world by leading organization ’s to meet the high demands of specialized embedded software development. TASKING tools have been deployed for over 25 years now which is a testament to its reliability and effectiveness. TASKING tools can be used for microprocessors like ARM, Power Architecture, 68K, 8051, Aurix/Tricore and many more. TASKING tools give engineers the capability to develop reliable, safe and efficient embedded software.

Altium has forged great partnerships over the years delivering its expertise to a variety of industry leaders. The company with its deep knowledge in the Electronic Automation Industry has partnered with the likes of BMW, Boeing, Philips, Lenovo, HP, and Siemens among so many other enviable names. Its portfolio of partnerships keeps growing each passing year as it maintains its status-quo as the leader in the industry for designing PCB’s.

With over 30 years of experience in continuous Research & Development in PCB design, Altium is positioned very well for growth. Altium has 31,000 subscribers globally and its flagship product Altium Designer adds roughly 6,000 new users every year to its count. Looking ahead, the software provider wants to expand into systems design after achieving its goal of attaining market leadership in PCB design by 2020. Considering at the heart of all the intelligent systems are electronics and PCB’s, Altium is bound to keep its growth margin of 30% which it touches every single year.

Mr.Aram Mikazemi is a huge presence at Altium. He was the Director of Research and Development from 1992-1999. He was the member of the Altium Board from 1992-2000. After a successful IPO in 1999, Mr. Aram left the company to pursue his interest in web-based software systems. He founded Morfik Technology in this pursuit. Later, he returned to Altium as part of Morfik Technology acquisition. He was appointed the Head of Engineering and then served Altium as the Chief Technology Officer before starting his tenure as the CEO of the company. Mr.Aram Mirkazemi has a Bachelor’s of Engineering from the University of Tasmania.

“Designers need tools that help them make the most of modern technologies, successfully manage projects, and deliver connected intelligent products. We create the tools designers need.”

“Altium is led by a passionate, highly experienced team with deep knowledge and expertise within the Electronic Design Automation industry.”

“Since 1985, we have been developing, creating and selling electronic design tools that help electronics designers harness the latest devices and technologies, manage their projects across broad design ‘ecosystems’, and create connected intelligent designs.”