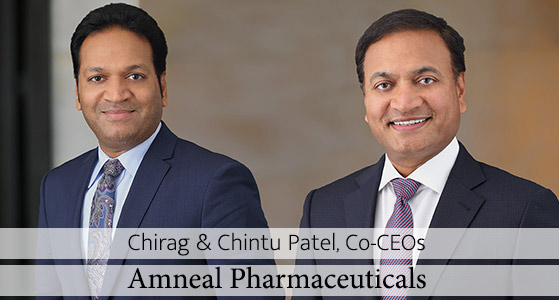 Health should be the number one priority for every human being. But due to life events and situations, it is hard for everyone to afford both their food and the medications they need to lead a healthy life. While food is indispensable for life, medications too are important for a better quality of life. But due to the inflated costs, medications are not always accessible to everyone. This is where generic medications become important. One of the biggest pharmaceutical companies focusing on the generic drugs is New Jersey-based Amneal Pharmaceuticals.

Amneal’s success story truly began when the Patel family migrated to the US in 1987. Chirag and Chintu Patel’s father was an industrial pharmacist but when the family came to America, they did so with just $20 to their name. So, the family put their head down and toiled very hard. While Chirag went on and took up a job at a hotel in NYC, Chintu took up a job at a candy store aged just 15. Being in the land of dreams enabled the brothers to get the best education they could and exposed them to a great business environment.

While Chirag Patel went behind his business ambitions where he had stints with several information technology start-ups, Chintu Patel chose to walk in his father’s footsteps to become a pharmacist. During his stint as a pharmacist, he saw many patients enduring tough times and he noticed that often they had to make the hard choice between buying their food or their medication. He identified that generic drugs could help in this scenario. He decided to help patients get access to affordable medicine. With his father’s guidance and Chirag’s business acumen, the family founded Amneal in 2002.

Right from its establishment, the company was focused on bridging the gap for affordable medicines. When they started out, generic drugs were hardly available to the American consumers. The substitution rate was between 30-40%. This number was poor in a country where an average senior citizen takes around seven prescription drugs i.e., $400 every month. Amneal wanted to change this.

The company’s revenue was just several hundred thousand dollars in 2006. In 2019, the company is valued at over $2 billion and employs around 5,000 people. The company has witnessed one of the fastest growths that have been ever recorded in the Pharmaceutical sector. Today, Amneal Pharmaceuticals is one of the biggest global generic medicine players in the world.

When you think of a pharmaceutical company, all you can probably think of is the medicines that come in strips or in the small bottles but Amneal is much more than that. The company does R&D, shipments and the all-important management, which contributes to making a pharmaceutical company work. All of these processes run seamlessly because of the employees that work at the company and its many facilities in the US and across the globe. It is their expertise that makes the tools work, their management that puts the customers first, and their passion that converts into the quality products. The company truly embodies a culture that similar to that of a family, they work together to succeed together. The Co-CEO Chirag Patel says, “At Amneal, we are always focused on keeping the entire family together.” His brother, on the other hand, says that the company is only getting started. “We have so much horsepower left in the tank.”

Last year was a momentous year for the company as Amneal Pharmaceuticals merged with Impax Laboratories, a specialty pharmaceutical company. The two companies combined to become Amneal Pharamceuticals, Inc. (NYSE: AMRX), the fifth largest generics business in the United States.

Even for a pharmaceutical company, Amneal has an impressive generics portfolio which has over 200 differentiated product families. These are marketed in multiple dosage forms. The numbers continue to grow each year. The company is now targeting CNS disorders and anti-parasitic infections.

With over 149 ANDAs filed at the Food and Drug Administration (FDA), Amneal’s generics pipeline is one of the largest in the US. The company has over 135 projects in active development with half of these being pipeline products. The company is looking ahead to enter biosimilars through in-licensed products.

The brothers, Chirag and Chintu Patel started Amneal inspired by their father’s life long work in the pharmaceutical field. Both the co-founders are seasoned entrepreneurs and are recognized as the foremost voices in the pharmaceutical industry. Together, they founded Amneal in 2002. Under their leadership, the company has grown organically and through M&A to become one of the leading U.S. generics pharmaceutical companies.

“We have passion. We have ideas. We want to make a difference. It’s why we’re here.”

“When we harness the power of all colleagues sharing ideas, voicing opinions and driving change, we can make great things possible.”