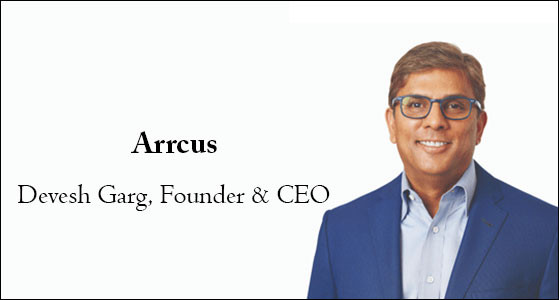 Networking is a challenging vertical to be involved in due to large-scale complexities. There are several large multinationals that dominate this space, but they do so without a sense of transparency. In such a scenario, the vertical hardly seems democratic. Arrcus was founded to be different in this regard. Being a networking company with a different voice, it places special emphasis on democratizing networking by providing best-in-class software.

Headquarterd in San Jose, California, Arrcus was founded to enhance the human experiences with the vision of connecting people, machines, and data. The company was established in 2016 by techpreneurs Devesh Garg and Keyur Patel with a mission of offering best-in-class software with the most flexible consumption model at the lowest TCO.

Today, the Arrcus team consists of world-class technologists who have an unparalleled record in shipping industry-leading networking products, complemented by industry thought leaders, operating executives, and Tier One VCs. The company has raised $49 million in funding and has backing of quality investors, including Lightspeed Venture Partners, General Catalyst, and Clear Ventures. Its Board of Directors includes Guru Chahal, Partner at Lightspeed, Steve Herrod, Managing Director at General Catalyst and Chris Rust, founder and General Partner at Clear Ventures.

In today’s digital age, enterprises are increasingly managing applications and data that can span the entirety of a data center, multi-cloud and edge environments. This means that for them, delivering software-centric solutions with a common software-powered architecture, common operational capabilities, and a common security posture across all these environments is key to modern digital-first networks.

In July 2020, Arrcus launched a solution to connect distributed applications and data. The solution is called Arrcus Multi-Cloud networking (MCN) platform. The Arrcus MCN Platform enables highly available connectivity for workloads and data with hyperscale performance and security across any cloud, any region, and any site. “The Arrcus MCN platform, with a simple, scalable, and seamless approach, extends the proven ArcOS hyperscale architecture to meet, exceed and future-proof customers’ multi-cloud networking requirements,” said Scott Raynovich, Chief Analyst at Futuriom.

By leveraging Arrcus MCN, enterprises can now sustain the rapid growth of applications and data in distributed locations anywhere in the world to deliver cloud networking. “Approximately 90% of SaaS customers require solutions integrating existing data centers with public clouds. Furthermore, these solutions must support both brownfield and greenfield deployments while providing flexibility, predictable application performance, scale, and always on security while supporting a consistent orchestration environment,” says Devesh Garg, founder and CEO of Arrcus. Powered by the ArcOs, the Arrcus MCN delivers hyperscale multi-cloud networking solutions with reliable scale, predictable performance, and seamless orchestration. “The Arrcus MCN platform singularly provides the Power of One, a solution that unifies and provides seamless connectivity across the data center, the edge, and the multi-cloud”, added Devesh.

The company has a strong background that is based out of originality and innovation. Together, the Arrcus team has shipped over 875 products, has over 215 patents, and more than 290 IEFT papers and submissions.

He is a seasoned tech executive with global entrepreneurial, strategic, and operational experience in early stage start-ups as well as private and public market leaders. He has been at the forefront of the EDA industry, digitization of broadband communications, multi-core processing, and the emerging markets of Asia. Prior to founding Arrcus, he was the President of EZchip (NASDAQ:EZCH) which was acquired by Mellanox (NASDAQ:MLNX). Prior to that, he was the founding CEO of Tilera Corporation, the pioneer in high core count multi-processors (acquired by EZchip).

In the past, he has served as the Managing Director for Bessemer Venture Partners and its $385M private equity fund. Devesh was an early pre-IPO employee (~#50) of Broadcom (NASDAQ:BRCM) where he built a team and a $500M annual business within 3 years. In his last role at Broadcom, he served as the General Manager of the Security Line of Business. During his 7-year tenure, Broadcom reached a peak market capitalization of $72B and completed 22 acquisitions. He also was an early pre-IPO employee at Synopsys and early at LSI Logic.

“Only Arrcus delivers the Power of One through the open integration of best-in-class software, hardware, and silicon.”

“Unify manageability and control with the ease of a single network solution that works across your entire network infrastructure from routers to switches to servers.”

“We deliver ultra fast convergence combined with low latency and faster restart times, so your network thrives as it grows.”