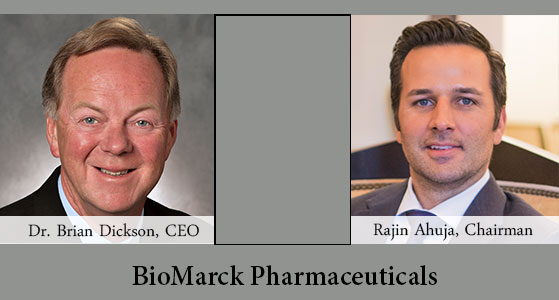 NSCLC (non small cell lung cancer) and ARDS (acute respiratory distress syndrome) are both associated with a poor prognosis. NSCLC, despite advances with immunotherapy, still has a high morbidity and mortality. ARDS occurs in >200,000 patients per year in the US and approximately 40% die within 30 days even on a ventilator, the only approved therapy. BIO-11006 has the same method of action in both - prevention of cell division and motility. Cancer cells in NSCLC and neutrophils in ARDS. BIO-11006 is in Phase 2 clinical studies in both diseases.

Biomarck Pharmaceuticals Ltd. is a Durham, N.C. based biopharmaceutical company focused on the clinical development of its lead compound (BIO-11006) for the treatment of significant disease states such as ARDS and NSCLC. The privately owned company was founded in 2002.

Biomarck, with its patented technology platform, utilizes peptides that block the function of a protein called MARCKS (“Myristoylated alanine-rich C-kinase substrate”) in order to develop and license products targeted at difficult-to-treat diseases with unmet needs.

Biomarck’s patented drug platform contains over a 100 peptides that hinder activation and function of the MARCKS protein, a molecule integrally involved in respiratory disease and cancer progression. Biomarck was recognized as the “Best Pipeline of Promise” at the BIO International Convention 2018 hosted by Biotechnology Innovation Organization.

A glimpse of what’s in Progress

Biomarck is developing a portfolio of products utilizing targeted anti-MARCKS technology for the treatment of Cancer and ARDS. MARCKS is a protein in the human body which plays important roles in cell shape, cell motility, secretion, transmembrane transport, regulation of the cell cycle, and neural development. This protein is crucial in the development of cancer and ARDS. MARCKS is usually bound to PIP2 – a lipid which is integral to the cell membrane of all living organisms and acts as a second messenger in a variety of signaling pathways. MARCKS attaches itself to PIP2, keeping PIP2 sequestered and inactive in regulating motility and cell division.

In cancer cells and in activated neutrophils in ARDS patients MARCKS becomes phosphorylated, allowing PIP2 detachment. This activates other signaling molecules such as FAK, AKT and several cytoskeletal proteins that make up the cytoskeleton structure. This structure helps cells maintain their shape and internal organization, and also enables the cells to carry out essential functions like division and movement. In cancer, this results in increased cell migration (metastasis) and proliferation. And in ARDS, this causes an influx of neutrophils and a “cytokine storm” resulting in fluid buildup in the lungs. Neutrophils are White Blood Cells that fight off bacterial infection, and cytokines are small proteins important in cell signaling, and their release has an effect on the behavior of cells around them.

BIO-11006 is a novel patented peptide that inhibits the MARCKS protein. It can selectively de-phosphorylate and inactivate MARCKS - related signaling. This changes cell morphology, stops cell division and alters the cytoskeleton to stop cell migration in cancer.  In ARDS, it blocks the  influx of inflammatory cells into the lung.

BIO-11006 has, in InVitro studies, shown activity against all solid tumors tested including lung, breast, colon, and sarcoma. It is part of a portfolio of over 100 patented compounds owned by Biomarck. BIO-11006 works in numerous animal models, and may treat Lung Cancer and ARDS in patients. Clinical trials in both are underway. Biomarck is determined to complete Phase 2 clinical studies in both diseases as designed with its funds. The company is, however, open to all options such as M&A, co-development or “right of first refusal” with the intent of expanding both clinical studies. These products are first in class for both indications.

BIO-11006 Inhalation Solution was originally under development for the treatment of chronic bronchitis until the more compelling data for NSCLC and ARDS became available. BIO-11006 has a complete pre-clinical package of toxicology and pharmacology data and has been through Phase 1 and 2 clinical studies in the USA in over 200 patients/subjects with a good safety profile. The product is based on scientific concepts developed by Dr. Kenneth Adler, a world-renowned professor of cell biology at North Carolina State University. It was his research that first discovered that MARCKS protein controls inflammation in the airways as well as cancer progression in the lung.

Dr. Dickson, the CEO of Biomarck Pharmaceuticals, is a physician with over 25 years of experience in pharmaceutical management, equally divided between major pharma, and biotech and contract research companies. His clinical management responsibilities have  included worldwide clinical development, regulatory affairs, and preclinical development in toxicology, drug metabolism, and molecular pharmacology.

Dr. Dickson led the NDA development and submission teams for 17 regulatory applications that included new clinical entities (NCEs), biologicals, devices, and supplemental applications for new indications and new dosage forms. Dr. Dickson served on the WHO subcommittee for nutrition and anemia, led as chairman and chief executive officer of Peckforton Pharmaceutical, Ltd. (UK), acted as the editor-in-chief for the Journal of Pharmaceutical Medicine, and  was a member of the board of the American Society of Hypertension, the Covalent Group, Inc, (NASDAQ) and Medeva PLC (Bermuda).

"We are developing a portfolio of products utilizing anti-MARCKS technology for the treatment of Cancer and Acute Respiratory Distress Syndrome (ARDS), while exploring the potential for additional clinical indications."

Mr. Ahuja possesses over 15 years of global experience in pharmaceutical mergers and acquisitions (M&A), and has an extensive background in drug development and co development partnerships. He has enjoyed a long and successful career in the pharmaceutical industry, having played leadership roles that ranged from the creation of new companies to licensing intellectual property (IP) to serving in several major drug companies worldwide.

Mr. Ahuja founded and launched his first pharmaceutical company while in his mid twenties, a company which successfully achieved FDA approval on three first to market drugs. He has had direct involvement in the interaction, negotiation, and licensing of many drugs with some of the most preeminent pharmaceutical companies in the world. His experience as an entrepreneur has led to the successful creation of several startup pharmaceutical companies that resulted in multimillion dollar valuations. In these ventures, he has been involved in raising the necessary capital to commercialize products, and his expertise and experience have been instrumental in extracting top value for development funds. He has developed and maintained relationships with numerous clinical and manufacturing organizations. Recently, he has globalized his pharmaceutical reach into India, Russia, Canada, and South America.

Mr. Ahuja is also a managing partner for an investment firm that deals in medically related investments. The projects in process range from $1 million to more than $100 million within the health care sector. He currently holds board seats in several companies and provides strategic advice for many startups and medical companies.

Mr. Ahuja received a Bachelor of Science degree in biology with a premed emphasis from Gannon University/ Hahnemann Medical and earned an MBA at Pennsylvania.

“Our Goal - Utilizing targeted anti-MARCKS peptides in order to develop and license products  targeted at difficult to treat diseases with unmet needs.”

"We are developing a portfolio of products utilizing MARCKS technology for the treatment of Cancer and Acute Respiratory Distress Syndrome (ARDS), while exploring the potential  for additional clinical indications."