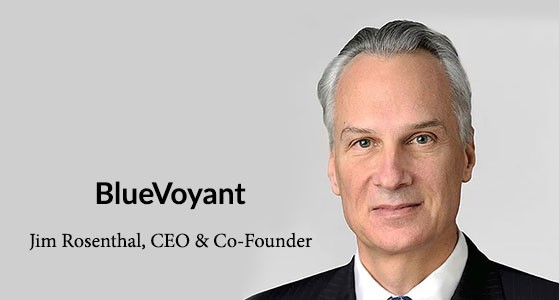 Today’s world runs on technology which is good in a way, but how your systems must be safe and reliable. Hacking of important data, network outages, computer viruses, and other cyber-related threats affect our lives and range from minor inconvenience to serious incidents.

We present to you BlueVoyant, a cybersecurity services company skilled in providing cyber threat intelligence, managed security services, and proactive professional services with forensic capabilities for incident response and remediation.

The company proudly says, “We help large enterprises with impactful intelligence and offer small and medium enterprises the same kind cybersecurity capabilities that large enterprises enjoy - all from a world-class team of experts that would be challenging to amass directly.”

In 2017, BlueVoyant built its team of analysts, engineers, and security professionals with a goal to deliver best-in-class capabilities- exploring new ideas, expanding its capabilities, and driving additional value for its clients.

BlueVoyant is building an expansive partner network and is committed to helping its channel partners understand their customers demand, and the provide the support required to close the deal.

Threat Intelligence: BlueVoyant discovers the vulnerabilities that are prone to attacks. It scrutinizes the risks that hinder the normal functioning of your firm and defend it from threats before they disturb your business. BlueVoyant offers Threat Intelligence and 3rd Party Risk services to organizations with mature cybersecurity programs. In addition, the company’s extensive Threat Intelligence data set informs and correlates with incoming threat data to ensure optimal correlation, response and remediation for its managed security services clients.

Managed Security Services: BlueVoyant’s MSS offerings are architected to be scalable and transparent to their clients. The company’s goal is to provide resource-constrained security teams with a level of security previously only available to the largest and most well-defended organizations. They do this by combining industry leading technology with expertise that is typically difficult for small to mid-sized organizations to hire and retain.

This service allows you to expand your cybersecurity capabilities to defend against the latest and most sophisticated threats.

Today’s threat landscape is evolving at an unprecedented rate. Threat actors have become agile, well-financed, and motivated to target organizations of all sizes. With over 1M new malware variants created each day, these cybercriminals have found new ways to evade detection.

BlueVoyant reduces risk through the assessment, validation, and improvement of your organization’s cybersecurity controls. The company says, “Our approach and methodologies are driven by our deep knowledge of adversarial techniques and tactics and by staying under the radar in the Deep and Dark webs.”

Before working in BlueVoyant, he was the Chief Operating Officer of Morgan Stanley until 2017. At Morgan Stanley, he was responsible to the CEO and the Board of Directors for Cybersecurity.

Jim is the recipient of the 2017 Critical Infrastructure Protection Award from the Financial Services Information Sharing and Analysis Center. He is the co-Chairman of Sheltered Harbor, a consortium of major banks, securities firms, industry associations, and technology service providers with the mission of preserving systemic confidence in the event of a cyberattack.

Tom Glocer is a Co-Founder and Executive Chairman of BlueVoyant. Tom has been an active investor via his family office since he stepped down as CEO of Thomson Reuters in December 2011. Prior to April 2008, Tom was CEO of Reuters, where he held a number of key leadership positions.

Jim Penrose is renowned for his innovative approach to cyber operations and has been called upon to solve the most complex challenges faced by the private sector and the US Intelligence Community. His previous experience in government includes 17 years of meritorious service at the NSA and 6 years in the Senior Executive Service.

Ron received his B.A. in Computer Science and the History of the Middle East from Tel Aviv University.

Milan Patel came to BlueVoyant from his role as a managing director in the Cyber Defense practice at K2 Intelligence. Before K2 Intelligence, Milan was the CTO of the FBI Cyber Division in charge of technology strategy.Milan organized and co-lead the Joint Requirements Team, facilitated by the White House National Security Council.

Austin Berglas comes to BlueVoyant after building and leading the Cyber Defense practice at K2 Intelligence. Prior to K2 Intelligence, he served 22 years in the U.S. Government.

Austin was the Assistant Special Agent in charge of the FBI’s New York Office Cyber Branch. There, he oversaw all national security and criminal cyber investigations in the agency’s largest cyber branch, and was awarded the FBI Director’s Award for Excellence in a Cyber Investigation.

Robert Hannigan is Chairman of BlueVoyant International. Until 2017, Robert was Director of GCHQ, the UK’s largest intelligence and security agency and NSA equivalent. There he led the creation of the UK’s National Cybersecurity Centre (NCSC) and oversaw the UK’s pioneering Active Cyber Defense Program.

Gad Goldstein, President of BlueVoyant International and Chairman of Israel

Gad Goldstein is President of BlueVoyant’s international business. Gad has more than 30 years of experience in the Israeli security and intelligence community. In his last several positions, Gad served as a division head, in the rank equivalent to Major General.

“BlueVoyant protects you from agile and well-financed attackers.”

“We enable and execute exceptional cybersecurity defense and protection through technology and tailored services.”