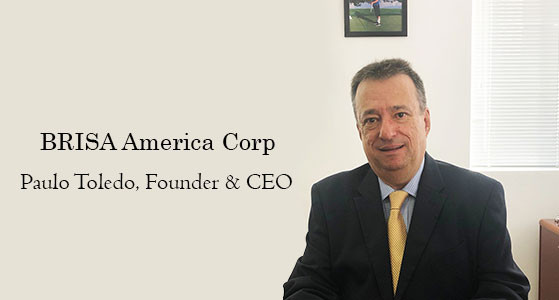 Before the internet arrived, computer networks were scarce and did not allow for multivendor environments. Each computer manufacturer had its own communication languages, usually not supported by other vendors. This has been BRISA’s startup motivation and it was then the company started developing standards and technologies to allow different computers and networks to communicate seamlessly. The CEO of BRISA, Paulo Toledo, founded the company in 1988 with an initial objective to establish international liaisons in order to foster the development of international standards to support easier communications among computers. We interviewed him to get better insights into the company and its services. Here are some essential parts of the interview:

Why was BRISA born? What is its history, and how has it transformed over the years?

BRISA was born in 1988, a time before the internet and the IP protocol diffusion when computers of different brands couldn’t communicate. BRISA’s first challenge was to implement international standards that would allow broad communication between machines. Today we see a lot of computer networks communicating very easily, and it even seems that this has always been so. It was not: this is the result of many pioneering works of the 90s, of which we are proud to have participated and contributed.

In its history of more than 30 years, BRISA faced many other challenges: the creation of the first broadband internet in Latin America, the digital certification policy of Brazil (now consolidated as a national Law), participation in the consolidation of Brazilian Digital TV, hundreds of R&D projects, thousands of test campaigns, etc.

Our history with systems development and integration dates back to the inception of our organization. We have faced major challenges also in this area, from systems that enabled modern telecom service provisioning systems to interact with existing old software still in use in telco operators; to complex management software for the entire system of schools in a large metropolis; from automated systems for call centers to the automated integration of large tour operators with its associated travel agencies all over the planet.

The construction of our experience in software development and customized systems solutions (including software embedded in electronic equipment) started from a vision of applying sound engineering rather than specialization in languages or methodologies. Our professionals can be considered “technological polyglots” as they master many languages, various methodologies, and most technologies in use today.

Why should people pick BRISA? How does BRISA outperform its competitors?

We have positioned BRISA as a very reliable supplier, able to create innovative solutions tailored to our customers’ real needs. We are always seeking to differentiate our customers from their competition and not just include them in the middle of a horde of undifferentiated companies that use similar systems and do similar things compared to each other. The customization, reliability, and constant innovation of BRISA’s solutions put us ahead of competitors in customer preference. And this translates into lasting relationships between BRISA and its clients.

What are the benefits of using Hotel Automation Solution?

For hotels, automation is a form of service standardization and cost reduction. Only these two reasons would suffice to justify the intensive application of automation solutions in hotels. But there are many other benefits. When a hotel replaces human work with automation, it automatically finds itself free from employee shift management (after all, hotels work 24 x 7, all year round), days off, vacations, unjustified absences, high turnover, etc. Not to mention expressive cost reductions.

Automation, even when it is not used to replace human labor, as is the case of BRISA’s Housekeeping App, allows better employee performance monitoring, guest services improvement, streamlining processes, among many other advantages. However, since the beginning of last year, automation has another huge contribution, allowing better to manage social distancing, much needed for guests’ and employees’ safety, in these times of pandemic. Automation enables self-service and remote service, for a series of activities that in hotels are usually taken care of by human attendants, in close proximity with the guest: check-in, check-out, messaging service, concierge, etc.

What are your Hotel Front Desk Automation Solutions?

BRISA has two solutions for hotel front desk automation. The first is based on a self-service kiosk, to be installed in the reception area of the hotel, which can perform the front desk functions: check-in, early check-in, check-out, late check-out, door’s key issueing to allow access to the rooms, collection of payment, choice of room (where this option is available), registration card printing, and all other functions of a traditional front desk. Coupled with another BRISA solution, known as Guest Recognition, our front desk automation service is able to compare the person who is performing self-service at the kiosk with his/her ID image and compare the name shown in the ID presented with the name printed on the credit card, in order to generate evidence that will minimize charge-back frauds, much more frequent in hotels than we could (or would like to) imagine.

The second solution, known as Guest App, is a mobile software, which can be installed on a device in the reception area of the hotel or even on the mobile phones of the guests themselves. It performs the same functions as the kiosk, except the printing of keys and credit card reading, which requires specially coded machines, available only within the hotel premises. For customers who want greater availability in their front desk automation, BRISA usually proposes a combination of Kiosk with Guest App to offer a reliable back-up with diversity of hardware, software, telecommunications, and power source, which are totally different in these two solutions.

Paulo Toledo is the Founder and CEO of BRISA. He is an international serial entrepreneur, technology enthusiast, a true “world citizen,” with ventures in many areas and different countries. He is an electronic engineer with a specialization in digital communications and also holds a MBA degree. Paulo started his engineering career in 1983. In 1988 he participated in the inauguration of BRISA as its first Executive Director. In 2016 Paulo Toledo started BRISA America, where he is the current President and Global CEO for the BRISA group. He is also a visiting professor and a Consultative Committee Member at Fundacao Dom Cabral, ranked top 10 business schools in the world by Financial Times.

“BRISA has worked with us for over 10 years. Their constant search for improvements throughout the process and always aiming for client satisfaction is what differentiates them. The relationship grew for every project, which helped maintain great trust and respect on both sides. We celebrate each success and learn from every challenge we face together,” Mauricio Kazuo Okawa, General Manager, LG Electronics Product Validation, Latin America.

“BRISA understood our business and not only developed software to facilitate the current jobs, but gave us a powerful tool that opened up a whole new range of opportunities,” Silvio Cirelli, President, Quanta Technology.