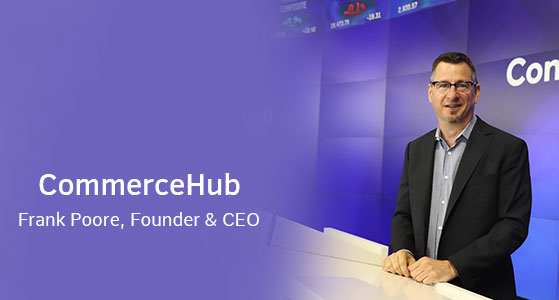 CommerceHub: Powering the future of shopping

Technology has pushed every industry to evolve and retail has been no different. Although, on the contrary, it is being said that retail is dead. It isn’t. It is just changing- like every other industry. While the change is being seen as a welcome move by some, it is being seen as a bane by others. Supply, demand, and delivery have changed too with time. To keep up with the changing times, retailers are now turning to the expertise of companies that can help tackle some of these new issues. CommerceHub is one such company that excels at – everything retail.

Founded in 1997 by Frank Poore, CommerceHub is what you can call- the quintessential backbone of the biggest retail players of this world. It has been more than 20 years since the company has come to being and with time the company has grown in reputation exponentially. It is widely regarded as the go-to solutions provider for the best of the retailers in the world today. The company enables retailers and brands across the world to sell a large number of products online without ever having to take possession of the inventory.

The traditional model needed a retailer to bring in a huge number of items into a warehouse. And since sales are unpredictable, they would get stuck with the items at times. But with the proliferation of the internet and the digital e-commerce, now retailers are able to expand their product offering radically without ever having to do this. As the product offerings from the retailers increase with e-commerce, CommerceHub is there, connecting the retailers to the suppliers who provide millions of products to choose from.

When the company started it had no mentors and no real infrastructure to support their growth. But it was QVC that gave CommerceHub its big break. The co-founders Frank Poore and Richard Jones got that first bit of big motivation when they saw a bunch of people using their software at QVC. From here on, there was no turning back for the company.

But there were other setbacks early on. The company is based out of Albany, New York. Many people had reservations about attending board meetings at Albany which was relatively unknown for tech companies in the early 2000s. There were many times when the company had it tough raising money which is crucial for any company starting out. But things changed as the Nano campus was built, which was originally part of SUNY campus in Albany, and the infrastructural programs picked up its pace. This benefitted CommerceHub greatly.

But now in 2018, they have a state-of-the-art office which has great facilities like a game room that is equipped with vintage arcade games and also an X-Box console, so that the employees can take a quick break in between on the tough days. Further, the company has a yoga room and meditation room where the employees can work on their fitness and health.

When you place an order online it is quite possible that CommerceHub is the one doing the hard work for the retailer you are placing your order with. When you place an order online, the order comes through CommerceHub. And it does what needs to be done to fulfill the order and makes sure that the product gets to the right consumer in the specified time. But the retailers’ brand name would be what you see at the end of the day on your order. Not that CommerceHub is complaining!

In the last year alone, more than $16 billion worth of goods flowed through CommerceHub’s system and they worked with around 50 big retailers from the U.S and U.K. Further, they even worked with as many as 11,600 integrated brands and sellers to satiate their customer’s appetite.

CommerceHub is the one-stop solution for any retailer as it fulfills all their needs. Be it supply, demand or delivery, CommerceHub can do it better than anybody. Big names like Walmart, Best Buy, QVC, JC Penny, Kohl’s, Adidas, and Walgreens count on their solutions and services. If you are a retailer and you want to grow your assortment, delivery, and demand, CommerceHub is the company you should count on.

Mr. Frank Poore founded CommerceHub in 1997. He has led the company right from its inception through its establishment as an industry leader now. Mr. Poore pioneered the use of mobile technology in the music industry. He launched successful apps for Kenny Chesney and other major music festivals.

CommerceHub was sold to Liberty Interactive in 2006. He returned to CommerceHub in 2013 as the CEO and helped the company change from being a data logistics company to a merchandising and fulfillment platform. Mr. Poore is a U. S Army veteran; he served as a combat radioman in the army. He earned his MBA from the University at Albany. He is also a huge hockey fan.