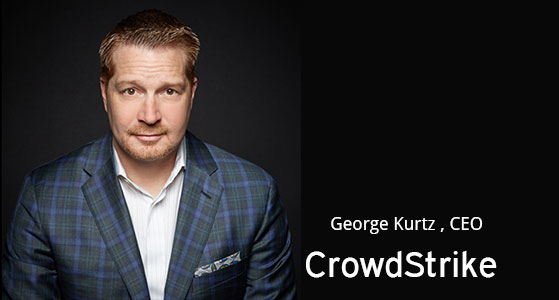 Security is the keyword across the globe. No matter how secure we think we are the advancements in technology lead to risks and eventually to an attack. There are many organizations out there who are trying their best to curb the attacks and its aftermath. George Kurtz and Dmitri Alperovitch realized that the sophisticated cyber attacks that were forcing the world’s leading businesses into a crisis could not be solved with existing malware-based defenses. They got together and co-founded CrowdStrike to fix a fundamental problem.

The founders knew that it was time for a brand new approach that combines the most advanced endpoint protection with expert intelligence. Founded in the year 2011, CrowdStrike has an aim to pinpoint the adversaries perpetrating the attacks, not just the malware. It has a simple mission statement and that is to stop breaches.

Prior to starting CrowdStrike, George and Dmitri spent a year traveling the globe visiting the world’s largest organizations, listening to their security challenges. Prior to starting CrowdStrike at one of the largest security vendors on the planet in the position of the Worldwide CTO and the Vice President of Threat Research respectively. They became painfully aware that existing solutions were falling short and the situation was unable to meet the latest challenges in information security.

“The in-depth investigations we were conducting for customers who had been hacked — along with a glance at the headlines on any given day — confirmed what we already knew,” the duo explain. They found that despite spending millions of dollars on the best security products and personnel available, major organizations were suffering devastating breaches, seemingly on a daily basis. Unfortunately, there was no “silver bullet” technology to offer that could keep the customers from becoming the next headline.

This was where CrowdStrike stepped in. It began helping business and organizations stop breaches by offering the most comprehensive cybersecurity solutions available today. The solution is built on cloud-native architecture and delivered via a single lightweight agent called the CrowdStrike Falcon. The CrowdStrike Falcon platform delivers next-generation endpoint protection with unparallel speed, scalability and unrivaled visibility across the entire industry. The platform is defending against today’s most sophisticated and stealthy attacks and at the same time, it is mindful of the client’s resource and budget requirements.

Sharp as a Falcon

It is no doubt that CrowdStrike is the leader in cloud-delivered next-generation endpoint protection. CrowdStrike has revolutionized endpoint protection by being the first and only company to unify next-generation antivirus, endpoint detection and response (EDR). Additionally, it has developed a 24/7 managed hunting service which is delivered through a single lightweight agent.

The company’s prized solution is the CrowdStrike Falcon platform. It is certified to replace legacy antivirus and has reinvented how endpoint security is delivered. The CrowdStrike Falcon comes with an industry-leading cloud-native architecture. The best part of the platform is that it uses sophisticated signature-less artificial intelligence/machine learning and Indicator of Attack (IOA) to protect customers against advanced cyber attacks.

A team of well-built defenders

It’s the approach towards security that makes CrowdStrike stand out. But this approach wouldn’t be so revolutionary if it didn’t have the best and brightest minds. The team working at CrowdStrike carry experience not only in the technology and security sectors, but also extend to the law enforcement, industry, and intelligence communities. A shared passion for creating the next-generation technologies and services is what binds everyone together. The entire team is committed to defeating today’s toughest adversaries.

Moving to the executive team at CrowdStrike, it is comprised of savvy business leaders and security industry experts. The entire executive team brings years of experience together to create security solutions that just work. There is a strong culture that is cultivated by the team members and they work tirelessly to protect enterprises and governments from advanced threats and targeted attacks with cutting-edge technologies and professional services.

Serial entrepreneur George Kurtz is the CEO and co-founder of CrowdStrike. Kurtz is an internationally recognized security expert, author, entrepreneur, and speaker. He has more than 23 years of experience in the security space, including extensive experience driving revenue growth and scaling small and large organizations. His prior roles at McAfee, a $3 billion security company, include Worldwide Chief Technology Officer and GM, as well as SVP of Enterprise.

Prior to joining McAfee, Kurtz started Foundstone in October 1999 as the founder and CEO responsible for recruiting the other six founding team members. Kurtz has been quoted or featured in many major publications, media outlets, and television programs including Bloomberg, CNBC, New York Times, USA Today, Wall Street Journal, and many others. He also authored the best-selling security book of all time, Hacking Exposed: Network Security Secrets & Solutions.

“We don’t have a mission statement — we are on a mission to protect our customers from breaches.”