Every day at FireEye, we see the firsthand impact of cyber-attacks on real people 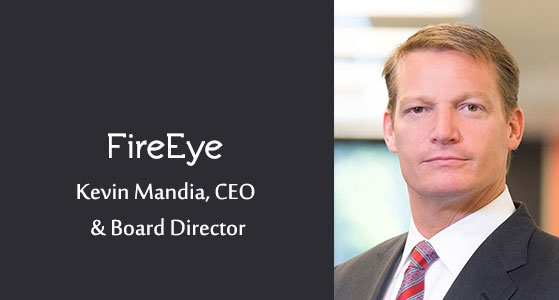 Every day at FireEye, we see the firsthand impact of cyber-attacks on real people

FireEye is born with the exclusive learning system. Its offerings give its customers complete protection, delivers threat intelligence and train services team to be well prepared, reply and evade infringement. The FireEye Innovation Cycle was developed by product teams embracing their world-class frontline threat expertise AND their frontline experts embracing its solutions.

Customer story (in the company’s words)

As a major economic institution in one of the growing regions of the world, the central bank relies on an IT infrastructure that is capable of handling a variety of demands and issues. Keeping up with the latest cybersecurity advances and challenges are needed to keep the organization secured. New threats, increasing in volume and sophistication, are designed to go undetected for long periods of time and require technology capable of detecting attacks that traditional cyber defenses miss. They require a new far-seeing cybersecurity strategy and the right tools to support this strategy. Proof of value leads to discovery and implementation Entrusted with promoting a stable financial environment to achieve sustainable and inclusive economic development, the central bank is an institution whose mission is extremely sensitive and whose reputation is critical. At the core of the bank’s ability to meet its mandate is a substantial IT infrastructure that not only needs to run optimally but must be protected. The bank had long embraced best practices when it came to cybersecurity but recognized that advanced threats evolve over time and need to be well handled. Bank of Thailand Chooses FireEye. FireEye is the intelligence-led security company. Working as a seamless, scalable extension of customer security operations, FireEye offers a single platform that blends innovative security technologies, nation-state grade threat intelligence, and world-renowned Mandiant® consulting. With this approach, FireEye eliminates the complexity and burden of cybersecurity for organizations struggling to prepare for, prevent and respond to cyberattacks. ©2019 FireEye, Inc. All rights reserved. FireEye is a registered trademark of FireEye, Inc. All other brands, products, or service names are or may be trademarks or service marks of their respective owners. The world has changed dramatically. The reality of what we face is a world with an extraordinary array of new security challenges. Bank of Thailand chose FireEye technology to manage advanced protection. The bank selected FireEye for a proof of value (POV) conducted over a period of three months. The POV soon discovered a number of previously undetected threats enabling system administrators to take action and make the system even more secure. As a result of the findings, the bank implemented FireEye to strengthen their IT infrastructure. This solution consists of FireEye Network Threat Prevention platform and FireEye Email Threat Prevention platform in operation alongside FireEye Central Management to coordinate intelligence gathering from the Web and email appliances in addition to the intelligence gathered by the FireEye Threat Intelligence. Best practices become better with FireEye The central bank followed best practice when it came to cybersecurity, but like many organizations with a global profile and substantial national responsibilities, the IT leadership team understood that this wasn’t enough anymore. This view was reinforced when FireEye briefed the bank’s cybersecurity team on APTs prior to the POV. The POV was up and running in less than a day and used actual traffic analysis to investigate what was occurring in the bank’s IT environment. According to the senior director of the bank’s Information Technology department, “the POV quickly revealed areas for improvement and potential threats that the traditional defenses had utterly missed.” The FireEye team remained in close contact with the bank’s key personnel throughout the process. As the senior director said, “FireEye proved very supportive both of the technical and business aspects of the POV and ultimately our implementation of their technology both in terms of cost and underscoring the difference between traditional defenses and the next-generation defense system.” Looking ahead, the Bank of Thailand is continually strengthening its IT infrastructure together with reinforcing policy and process on IT Security to achieve the highest productivity and lowest risks.

Managed Defense Nights and Weekends give round the clock protection as said by FireEye. While doing this, firms can safeguard against cyberattacks without recruiting extra staff.

MSSP Alert is to examine whether resellers, MSPs, and MSSPs can successfully:

Cloud: Higher cloud network visibility by getting down data from your cloud infrastructure and accelerate detection and response by applying intelligence.

Its solutions also detect those accounts that are given away and evade attackers’ presence on your cloud. It also stops configuration vulnerabilities in their tracks by detecting inadvertent AWS or Azure misconfigurations.

“FireEye platforms detect compromises within minutes and quarantine malicious files or emails, and then enable us to quickly track down affected machines and contain the threat, even when devices are off-network.”

FireEye gives me a better vantage point—a perspective of the battlefield that I never had before. I can make better decisions.”

It adds by saying, “This achievement builds on our recent announcement that independent analyst firm Forrester Research has named us as the only “Leader” within the External Threat Intelligence space. This assessment came from the evaluation of 15 cybersecurity vendors against 10 different criteria.

Kevin has served as FireEye Chief Executive Officer since June 2016 and was appointed to the company’s Board of Directors on February 2016. He was previously President of FireEye from February 2015 until June 2016. Kevin joined FireEye as Senior Vice President and Chief Operating Officer in December 2013, when FireEye acquired Mandiant, the company he founded in 2004. Before Mandiant, Kevin was the Director of Computer Forensics at Foundstone (acquired by McAfee Corporation) from 2000 to 2003, and the Director of Information Security for Sytex (later acquired by Lockheed Martin) from 1998 to 2000.

“Our fundamental belief is that hands-on front-line expertise and intelligence, combined with innovative technology, provides the best means to protect our customers from cyber threats.”