For Review and Analysis: Kira Systems, a Toronto-Based Developer of Machine-Learning Software, Helps Enterprises Uncover Relevant Information from their Contracts 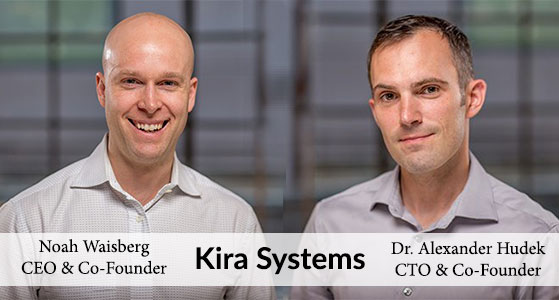 For Review and Analysis: Kira Systems, a Toronto-Based Developer of Machine-Learning Software, Helps Enterprises Uncover Relevant Information from their Contracts

“Waisberg believes the capabilities of and use cases for the product can be greatly expanded by making the software even more accurate and granular.”

Law firms have, largely, operated in the same way for generations, but the old model of the law firm is being challenged. Changing client needs, demand for better value and the rise of new technology like artificial intelligence (AI) are pushing the legal sector in new directions. There’s a sense that the firm must adapt to survive and the innovators look set to succeed in an increasingly complex world. Change can be unsettling, but aspiring lawyers should understand the environment they’re moving into and the value of innovating today for tomorrow’s market.

In light of the foregoing, we’re thrilled to present Kira Systems.

The company was incorporated in 2011 and is headquartered in Toronto, Ontario.

Rewind to the Past

Co-founder of Kira Systems, Noah Waisberg, used to be an associate at Weil Gotshal & Manges, starting there as a junior associate in 2006. A lot of his work focused on M&A and he says he found himself spending a lot of time reviewing contracts during due diligence (DD). This information was extracted from Artificial Lawyer.

According to Waisberg, DD often amounts to between 30 and 60 percent of the legal bill law firms gave to their clients. In short, a lot of lawyers spend an enormous amount of time just reading through documents in search of information, often buried within clauses within the text.

Waisberg also noted how, at law firms right across the spectrum, junior lawyers often made mistakes during the DD exercise. And perhaps this was to be expected given that young lawyers and paralegals can work all weekend and long into the night, for example, in order to speed up a deal.

Despite the inefficiency, many large law firms had no problem with this approach as they had a huge number of junior lawyers and paralegals at hand that could be thrown at such tasks.

And although Waisberg doesn’t say it, it is well known in the legal industry that this inefficiency is very remunerative. Though, to be fair, if the client had a deadline there were, at least until now, no other ways of handling DD. Meanwhile, avoiding a thorough DD process was not really an option in the vast majority of transactions.

But was this ‘as good as it gets’? Couldn’t the due diligence process be improved?

Waisberg then started to notice that his fellow associates were always looking for the same kinds of information. Certain deals always drove a search for consent clauses, others to check the details of covenants, and property-related deals always created a demand to search for rent levels in the lease documents.

In short, there was a set of very clear patterns being repeated throughout the DD work. The information itself may have been locked away in potentially complex clauses, written in natural language, but surely there was a way of breaking that down and systematising this laborious process. That’s when Kira Systems was set up to digitise the process.

Toiling Against Odds Finally Pays Off

Scroll forward to January 2011 and Waisberg had left Weil Gotshal and teamed up with Dr Alexander Hudek from the Canada’s University of Waterloo. Hudek had done work in the field of bioinformatics, which focused on finding similarities between DNA sequences. He is now the company’s CTO.

The Toronto-based team started by trying to figure out a way to develop an applied AI system that could learn these search patterns and be turned into a program that lawyers could apply to their document searches.

Initially, the Kira Systems team tried to use opensource, off-the-shelf machine learning algorithms. They pursued this strategy for around six months but found the system never got accurate enough. The proto-Kira Systems software was limited in scope and could only consistently spot simple clauses.

A lot more machine learning R&D work was done, refining and improving the system and after two and a half years Waisberg says they were able to provide a compelling software solution that could deal with a wide range of information and types of clause.

The next job was to go and build up a client base, which the firm has done to some extent in a relatively short period. It publicly lists several law firms among its clients, including DLA Piper, Torys, Clifford Chance and Big Four accountant Deloitte. There are several others, including some relatively small law firms, though Kira Systems cannot, for now, mention all their names.

Kira Systems doesn’t stray into using its own manpower to help read documents or verify the results, nor does it seek to offer legal guidance on the information it extracts. Its job is clear: extract vital information from documents and do it with the accuracy and speed one would expect from an applied AI system, which can be a time saving of 20–90 percent.

Noah Waisberg, CEO & Co-Founder: Prior to founding Kira Systems, Noah practiced at the law firm Weil, Gotshal & Manges in New York, where he focused on private equity, M&A, and securities. Noah is an expert on contract analysis, legal technology, and artificial intelligence; has spoken at conferences including SXSW Interactive, ILTACON, and ReInvent Law; and was named 2016 ILTA Innovative Thought Leader of the Year. Noah holds a J.D. from the NYU School of Law, an A.M. from Brown University, and a B.A. with honours from McGill University.

Dr. Alexander Hudek, CTO  & Co-Founder: Alex leads Kira Systems’ R&D. He holds a PhD and M.Math degrees in Computer Science from the University of Waterloo, and a B.Sc. from the University of Toronto in Physics and Computer Science. His past research in the field of bioinformatics focused on finding similarities between DNA sequences. He was heavily involved with the human genome project. He has also worked in the areas of proof systems and database query compilation.

“Kira’s easy-to-use machine-learning software requires no consulting engagement and no technical expertise to get started.”