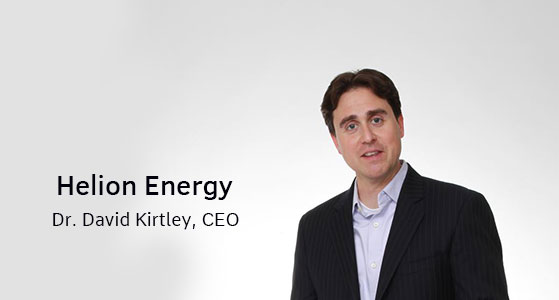 Fusion has been long touted to be the ultimate source of energy of the future. Without any possibilities of melt-down or hazardous nuclear waste, fusion doesn’t suffer from the drawbacks of fission. On top of it, the promise of clean and green energy is what makes it the most sought-after source of energy in current times.

Although harnessing the power of the Sun on Earth is a great idea, its commercial application is a big challenge. Perhaps, even the greatest challenge of recent times. Many organizations are in the race to make the most commercially viable fusion system but few are close. But Helion Energy aims to achieve this by 2020 and has made giant strides towards building the world’s first commercial fusion system.

Helion Energy was founded in 2013 by Dr. David Kirtley, Dr. George Votroubek and Chris Pihl. The company came into being at a time when the government was spending an exorbitant amount of money in pursuit of commercially unviable solutions in fusion energy. Their entry into the market radically transformed the entire industry.

By focusing on electricity production they engineered the fusion generator and fuel cycle that can be developed and implemented swiftly. In time, with both private and government backing Helion Energy, the company has shown that developing these systems sustainably is viable for commercial application. There probably isn’t another company which is better suited for this goal. With an entrepreneurial history of rapid development, cutting-edge engineering and award-winning science, Helion Energy is at the forefront of fusion energy.

Helion Energy’s Fusion Engine is roughly truck-sized. It uses Deuterium fuel that is extracted from water and helium from the engine’s exhaust to make plasma. Pulsed magnetic fields are used to accelerate the plasma into the burn chamber at over 1 million mph. Then, strong magnetic fields are used to compress the merged plasma to fusion pressure at over 100 million degrees. At this high-temperature Helium nuclei and Deuterium fuse and release charged particles that push back on the compressing magnetic field. The expanding plasma is directly converted into electricity.

This engine produces 8 times as much energy as what’s put in to produce it!

Helion Energy uses Helium- 3 fuel for its Magneto-Inertial fusion process. It has come upon a commercially practical system that is smaller and lower cost than the existing programs. The company is the leader in this space has many technical achievements to its name. Among these are:

Helion Energy is one of those companies that exude confidence. And it is this confidence that has brought in funding to them consistently. It has received funding from NASA, the U.S Department of Energy and the Department of Defense. In addition, it has received additional several millions of dollars from the private sector. This investment had big names like Mithril Capital Management, Capricorn Investment Group and Y Combinator, which is a world-renown seed accelerator.

Fusion energy has been a very tough cookie to crack but Helion Energy is pushing the envelope when it comes to making it commercially viable. The company is revolutionizing the energy market through its breakthrough technology which is carbon-free and comes at a low-cost.

Dr. David Kirtley is the co-founder of Helion Energy and helms the role of Chief Executive Officer at Helion Energy.

He has a stellar academic portfolio with vast experience in nuclear engineering, fusion, aerospace. Prior to Helion Energy, Dr. Kirtley was a Research Scientist at the Air Force Research Laboratory between 2001 and 2008. Before his stint at the Air Force Research Laboratory he was a Graduate Student Researcher at the University of Michigan. Further he has done his internship at Fusion Propulsion Research Internship at Advent Engineering and also interned at NASA Glenn Research Center. He also leads a team of scientists and an engineer at MSNW. He has a BS and a PhD in Aerospace Engineering from the University of Michigan.

“The team at Helion is combining their years of experience in fusion, newly available electronics technologies, and a revolutionary design to make fusion a commercial reality.”

“Helion Energy is backed by a world-class team of American investors, technical advisors from throughout the fusion community, and the Department of Energy.”

“The Helion team has designed and built award-winning technology and fusion prototypes many experts in the field consider the most promising approach to commercial fusion.”