30 Most Influential Companies of the year 2020 (Special Edition) 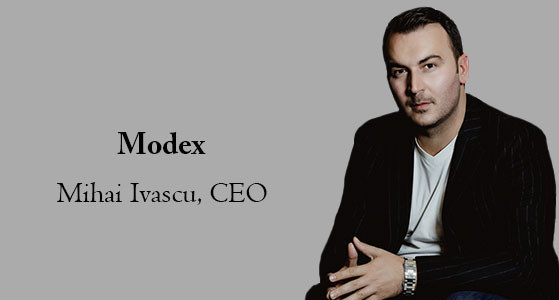 Technology offers great promise in this digital age. One of the major innovators in this space is London-based Modex which was established in 2017 by tech entrepreneur Mihai Ivascu. Modex develops cutting-edge solutions that make blockchain technology affordable, fast, and easy to adopt at the enterprise level. The company innovates thanks to its incredible team of experts and offers software solutions for the entire data management ecosystem.

Lately, the company has been becoming a strong presence in the academic environment through its Modex Academy online course and the incredible teams of experts. Following a scientific research and educational partnership with the Politehnica University of Bucharest, Modex started the first ever blockchain course in a Romanian University. Also, the company is developing CSR’s projects in schools and is in the middle of a huge expansion process on the London-US axis. We interviewed Mihai Ivascu to know more about the company’s innovations. Here are the excerpts:

Explain about your expertise in delivering enterprise blockchain security services, tools, and frameworks.

As an early promoter of the blockchain technology, Modex entered the market in an interesting period that was marked by a certain note of uncertainty, during which many PoCs based on blockchain circulated, but very few materialized to bring real business value. Having access to this bird’s eye view during a critical phase in the development of enterprise-grade blockchain solutions allowed Modex to detect a pattern in the pulse of the market and outline key areas in the enterprise environment where blockchain would have the biggest impact. The accumulation of our research, paired together with the technical skills of our in house team of experts led to the creation of our flagship product, Modex Blockchain Database (BCDB), a unique solution that brings trust in the enterprise sector by facilitating data immutability and data integrity.

By embracing a modular plug and play approach, Modex BCDB can seamlessly integrate with a wide range of technological offerings which exponentially increases the range of business use cases it can serve in the enterprise sector.

What is Modex BCDB? How does it benefit enterprises?

At its core, Modex BCDB is a software product designed to offer an infrastructure with quantifiable trust without creating any friction points or bottlenecks that may disrupt the internal workflow of the company. The value that Modex BCDB can add to the enterprise sector is tied to its unique capability to guarantee immutability, integrity, and complete data traceability. As the prime target for cybersecurity threat actors, the enterprise sector is subjected to a constant series of cyberattacks that grow in complexity and aggressiveness each year. Modex BCDB is an extra layer of security against a series of vulnerabilities and attack vectors utilized by cybercriminals. Ransomware ranks among the most common attacks. By combining complex cryptographic techniques, and hashing algorithms the BCDB solution makes ransomware a thing of the past.

How is your middleware hybrid solution avant-garde?

What makes Modex BCDB avant-garde is its agnostic approach to the blockchain framework and database engine. Each company is governed by a different business logic which requires specific tools and data strategies. To answer the needs of a wider business spectrum, Modex has decided to give companies the ability to choose the blockchain and database that best suits their needs. This way each Modex BCDB implementation can significantly differ from each other. By design, our solution intervenes in the development stack by positioning itself between an existing application server and database engine to grant access to a blockchain powered backend. Due to this unique approach to the integration process, we offer to our clients that rely on legacy systems the possibility to upgrade to a cybersecurity and data immutability infrastructure without a complete system overhaul.

How does Modex banking suite give you an upper hand?

We believe that to reap the full benefits of innovation, banks and other financial institutions need to build a strong relationship with technology service providers. With respect to this aspect, Modex has launched its custom development branch tasked with building a comprehensive suite of banking and fintech products designed to enhance the interaction between banks and their customers with future proof solutions that target three areas: mobile banking, internet banking, and company banking suite.

A distinguishing feature that Modex provides in this area is the immutable KYC mechanism based on our patented technology, Modex BCDB which stores all requests and all responses that the KYC mechanism provides. As a brief overview, our KYC mechanism can be used either manually or automatically by integrating a 3rd party provider, enabling both asynchronously and sync methods of KYC, so it’s highly customizable.

As a global company that has the tech core and developing teams located in Romania, Modex has initiated over the years multiple CSR campaigns in education through which it aims to give back to the community in an attempt to help nurture a new generation of IT professionals versed in digital transformation that will push the technology even further.

One of the first CSR campaigns organized by Modex took place at secondary schools, from Bucharest, with students aged between eight and fourteen. Alin Iftemi, Managing Director & Modex Co-founder hosted an Introduction course during which he showcased using real-life examples the difference between software and hardware, moving slowly to more complex programming concepts such as sorting algorithms and finally to data security, in an effort to educate kids for tomorrow’s digital revolution.

He has been recognized on the Forbes 30 Under 30 and is a finalist of Ernst and Young’s Entrepreneur of the Year. He is an experienced speaker and entrepreneurship mentor.

“At its core, Modex BCDB is a software product designed to offer an infrastructure with quantifiable trust, without creating any friction points or bottlenecks that may disrupt the internal workflow of the company.”