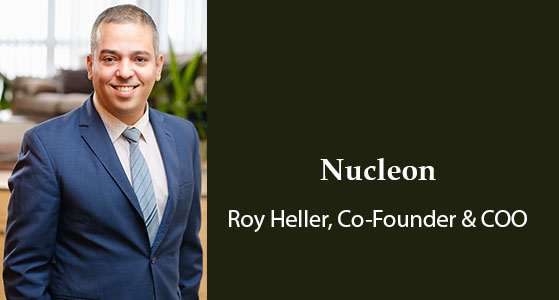 In the 21st century data became the new oil and almost every industry is becoming data-centric or has already become one. AI, Machine Learning and IoT are all propagators of data. But this data- explosion has its own side effects, insecure clouds, chips, and connected devices- is constantly threatened and security is struggling to catch up with the exponential growth of technology.

Nucleon was founded in 2016 to provide cyber intelligence for organizations. The company specializes in collecting and analyzing current threats on the internet and provides organizations and governments with proactive technology that compliments their existing cybersecurity tools that enables them to defend against new and emerging threats.

Within three years of its inception Nucleon has won several awards and has been chosen among the 10 most innovative startups to watch for 2019. The company has branches in Israel, the USA and Netherlands.

Sneak- peek into the company

The Nucleon Reverse Reconnaissance solutions are built upon Nucleon cyber intelligence technology. It is the first solution that actively protects internet exposed servers and services against reconnaissance attempts and stops attacks before they even begin. Enterprises can implement Nucleon Reverse reconnaissance solutions easily and with minimal setup and training. Nucleon technology is constantly updating its knowledge about new threats that are emerging and can alert clients without human intervention.

Nucleon is an innovative startup that is growing and expanding rapidly with leading clients from Europe, USA, and Asia. The company is extending its reach and is gaining traction because of its unique abilities to predict cyber attacks against organizations and can even delay and prevent attacks before they even start. Nucleon helps organizations to fully utilize their power of Data Awareness and Machine Learning in order to have a cost-effective cyber threat intelligence program.

Organizations are increasingly adopting Nucleon proactive cybersecurity solutions over traditional intelligence companies. Nucleon operates one of the most popular security lists sites in the world called www.cybersecure.ai which has thousands of visitors from around the world. They also have an Intelligence briefing podcast which is gaining followers and listeners and have several thousands of subscribers globally.

Impact of cloud and big data on cybersecurity

Nowadays, organizations are constantly in the run to find the right cybersecurity experts or intelligence teams to handle their security. By installing Nucleon cyber appliance called Threat Predictor, organizations can step back from the cybersecurity conundrums as the cyber appliance will monitor the network traffic and block traffic that contains bad indicators thus keeping the network safe always.

Managing the needs of a highly volatile market

Nucleon controls globally distributed 100+ polymorphic sensors in order to monitor the internet and to detect and learn from known and unknown attacks.

“Nucleon’s Polymorphic Sensors may be considered best as the natural evolution of advanced honeypots.”

Polymorphic sensors are crafted to look and feel like a real thing, whether it is mimicking a bank, municipality or airport. A polymorphic sensor is aimed to look like a real network with some vulnerabilities waiting to be exploited. The polymorphic technology that allows each sensor to change or replace its locations as well as the type of network it mimics, to protect their real identity from being revealed.

The explosion of data is causing serious concerns in the cybersecurity world as it is getting hard to collect intelligence about cyber threats for specific targets. Nucleon’s services help organizations to have their own threat intelligence team with a fraction of the costs of the traditional security system. The data that is collected by different sensors is transferred into the main system called Brian. Brian is a sophisticated cloud developed by Nucleon by employing advanced machine learning technologies and is also used for in-depth analysis and verification of attacks and malware.

Nucleon technology reduces the organization's TCO (total cost of ownership) on cybersecurity by providing intelligence to other tools on the network.

In the face of an ever-expanding threat landscape, security teams need to contend with a variety of operational challenges related to collecting indicators, prioritizing and blocking threats proactively. Nucleon takes a holistic approach to streamline reliable enterprise-grade cyber intelligence feeds by using a unique approach in cybersecurity in order to provide enterprises with the most current threats.

Nucleon is using the latest technologies for AI and ML. The company also developed its own data awareness algorithms which are known as Brain, Nucleon autonomous brain is also able to process, analyze and learn about threats with minimal human intervention. The advanced technologies and innovation of Nucleon allow our MSP and MSSP partners to stay ahead of the competition and realize the full power of proactive security using cyber intelligence, embracing the Future of Work, today.

Nucleon is working for several governments, enterprise and SMBs and their services and technologies are appreciated worldwide. Nucleon is slowly becoming a key player protecting millions of users.

The increasing scale of cyber-attacks is frightening and hence it important to invest more in powerful cybersecurity solutions. Nucleon’s targeted cyber threat intelligence organization is capable of feeding existing security solutions with actionable intelligence. It is possible to receive the threat feeds directly by consuming 24x7 secured API or by installing a local appliance that will synchronize the data with firewalls/gateways. By using patent-pending innovative technology and methodology Nucleon can deliver targeted actionable cyber intelligence that helps to stop the most advanced cyber attacks.

"We provide cyber intelligence and specialises in collecting and analyzing current threats on the internet."

"We specialize in collecting and analyzing current threats on the internet and providing organizations/governments with proactive technology that compliment their existing cyber security tools."