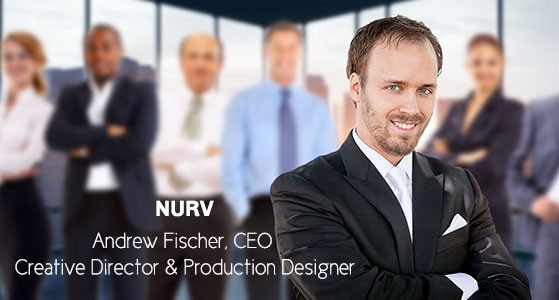 Today when it comes to digital marketing, options available are aplenty but putting your brand in front of the right customers can be confusing. It could also result in a big waste of money if done wrong. As a brand the focus for a company should always be trained at how they spend more time on providing value to customers rather than worrying about marketing. Most marketing companies focus on one right approach and keep doing what they already know. But NURV with its extensive experience in creative design and innovative digital marketing can help put your product forth on the digital medium in the best way possible.

“The worst mistake you can make in your business is to assume that you will still have customers tomorrow. At NURV, we treat every client as if we are trying to earn your business and impress you for the very first time.”

Founded in 1999, NURV is based out of Colorado Springs, CO and has come far from its inception under the leadership of Andrew Fischer. Andrew Fischer shot to fame internationally in January 2005 when he auctioned a temporary tattoo space on his forehead for advertising.  The auction got him nearly $40,000 but more than that he became an overnight sensation. He was interviewed by various media outlets from all over the world including ABC, BBC, CBS, CNBC, CNN, FOX, NBC and MSNBC. The auction was one of the most viral eBay auctions of all time. According to Fischer’s sponsor, Snorestop, its web sales multiplied five times and their retail sales jumped by 50%. He was quintessentially the first among the long list of people who auctioned various parts of their bodies for advertising.

Andrew Fischer went on to become a leading voice in viral content on the internet after 2005 as he used his various skills to lead many projects to reach the viral stratosphere. His knowledge and experience in the space was first directed to founding a viral entertainment and humor website called PopMalt.

Creativity on the digital medium

Marketing on the digital medium requires a level of expertise not all possess. The nature of the internet demands marketing to be on point and precise to get to the right target audience. Hence, it is important that your digital marketing is creative and does not shy away from experimentation.

Sometimes, organizations feel let down when their ideas do no hit the goldmine. But a good marketing strategy does not fail because it takes the best route to success. NURV pioneers in innovative marketing offerings and has helped many enterprises sell their products online the right way through cutting-edge content and creativity.

NURV has been involved in video production that has received many plaudits. We know that it takes more than just lights, and cameras to tell the right story to the potential customers. It takes work; writing and a certain magical touch to hit that right spot for a great video. Well, NURV has produced everything from Hollywood concept projects to interviews to many web commercials.

NURV’s area of expertise extends to the areas of digital art & graphic design, 3D game & app graphics, 3D animation & motion graphics, film & video production, digital & social media marketing and WordPress Website Development. They have done remarkable work in all of these areas. Because of this NURV has been a company whose work has been widely appreciated in the media. The cutting edge creative innovation has received a massive coverage both nationally and internationally over the years. NURV’s stories have gone far with over 250 media outlets worldwide. Among these are big names like CNN, CNBC, IGN, Fox News Channel, The New York Times, ELLEN, Billboard, and BBC.com.

Meet the pioneer of virality

Mr. Fischer has a strong background in creative design and marketing. He is an avid marketer and has had profound success with guerrilla marketing. Because of his extensive experience as a conventional artists, digital artist and 3D animator, he also takes up the role of Creative Director and Production Designer. He has talked to big audiences on the topic of “Going Viral” over the past decade. He has also been interviewed by many acclaimed national and international TV shows.

“As both visionaries and storytellers, we understand how the world views your brand is much more than what meets the eye.”

“Here at NURV, helping brands cut through the noise is what we do.”

“We make spreading your vision our mission, so you can stick to doing what you do best – dreaming up new ways to change the world.”

“You want your brand to look phenomenal and so do we – and so do your customers, they just don’t know it yet. We create stunning visual elements for any industry where looks matter.”