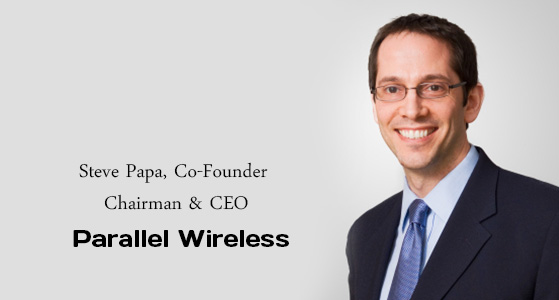 As the age of wireless networks reaches its next stage where it is ushering in 5G and enabling IoT, it is important that there are companies that are quickly innovating in this space to accelerate the growth. This growth needs to happen not only in the urban areas but also in the rural territories which are still catching up to the cities. With its eye set on reimagining the networks of today and building solutions, Parallel Wireless aims to connect 4.4 billion of the population that still remains unconnected.

Founded in 2012, Parallel Wireless has helped the world transition from the voice-only 2G networks to widespread data-first LTE networks. In the coming times, we will see an unprecedented inclusion of wireless devices in our lives. There is growing demand for the wireless networks to raise its capacity and speed to rival that of the wired networks today. To make this happen, a massive wave needs to sweep the world that would bring forth 5G in the still 2G majority times. Such a change will need solutions to tackle challenges pertaining to cost-effectiveness and capacity aspirations for 5G.

Parallel Wireless on its path to innovation is expeditiously working hard to simplify the cellular infrastructure and enable new coverage through deployments in a cost-effective way. The company is connecting places and people that were previously unconnected. By introducing HetNet Gateway and Converged Wireless System, they are innovating to coordinate and orchestrate Radio Access Networks (RAN) more effectively. They have been repeatedly recognized and awarded for their work in changing the telecom scene through their solutions.

Their solution to provide new coverage in the rural areas is very well-known and lauded widely. Economics has a very important role to play when it comes to reaching remote locations in telecom. Parallel Wirelessâ€™s technology with wireless mesh capabilities is helping bring coverage to remote locations by making deployments easy in an economical way. Their outdoor rural solution is low-cost, low-power which makes deployment easy and reduces the deployment cost by as much as 80% and brings down the deployment time to just a few months. This renders their technology revolutionary in todayâ€™s telecom scenario.

Parallel Wireless Public Safety solution is in compliance with 3GPP that provides a unified LTE network to the police, fire, ambulance, and military- all at a low cost. These come in handy in times of tactical operations, emergencies, and in natural disasters. Their solution is highly reliable with self-healing features and versatile backhaul capabilities. These are the things that networks need day-in and day-out to be reliable in a public safety scenario, and that is exactly what Parallel Wireless delivers.

Parallel Wireless is helping connect the unconnected and increasing the new coverage in six continents. Their path ahead is full of adventure, where they will go to new places and continue reimagining networks. They are the partners that you need to â€œReimagine Your Networkâ€. Through their cost-effective solutions, you will have a new coverage and also stay relevant and profitable.

Mr. Steve Papa as the Chairman and CEO of Parallel Wireless is in charge of the companyâ€™s strategic direction. He has been leading the companyâ€™s growth right from its first successful customer deployment to its broad commercialization and growth now.

Mr. Papa has been in the technology scene for over 20 years. Before Parallel Wireless he founded Endeca. Serving as the CEO here, he reimagined the database to support faceted information. Oracle acquired Endeca seeing its potential for a massive $1.1 billion, which was reported to be the 6th largest acquisition of the time.

At Akamai, Mr. Papa worked on revolutionizing the global internet content distribution. Further, at Inktomi, he led a team that changed the way network cache is used to create carrier-class caching. He has also worked at AT&T, where enterprise computing was reimagined with the first use of Intel processors for enterprise servers. He has a BS from the Princeton University and an MBA from the Harvard Business School.

Lauded for its solutions

â€œParallel Wireless is on a mission to connect the 4 billion unconnected people by reimagining the architecture of cellular infrastructure.â€

â€œParallel Wireless is reimagining the networks and building solutions that will enable and accelerate the long-term transition from todayâ€™s 2G/3G/4G to tomorrowâ€™s 5G cellular networks, IoT, and Smart countries.â€

â€œParallel Wireless is your innovative partner who has connected the unconnected and delivered new coverage on 6 continents.â€