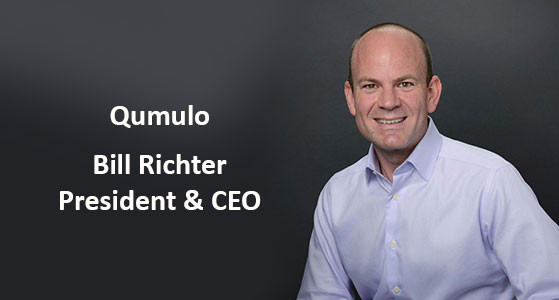 "Data is the new Oil." The quote has been proven right for all digital companies now. With each passing day, the collected data goes on increasing to new limits. Managing or hosting essential user data on-prem can be risky. Especially after the tight data privacy laws like GDPR, companies play it safe by using managed services to take care of their data responsibly. One of the leaders in the file data platform is Qumulo.

Qumulo software is a file data platform developed to offer you flexibility, running on industry-standard hardware and natively in the cloud. It is the first file system built to address your hybrid cloud workloads, whether you require burst computing capabilities, global data collaboration, or if your business is considering a migration to the public cloud.

Qumulo's distributed file system gives you the option of running on pre-configured hardware platforms, pre-qualified third-party hardware platforms from HPE or Fujitsu, or natively in the public cloud with AWS or GCP. Qumulo's software license is fully transferable between on-prem and cloud-based platforms so that your investment in their software is usable no matter how your storage strategies evolve in the future.

Qumulo software assigns the aggregation of real-time metadata to all data as it's ingested. This gives you real-time insight into your system without performance degradation or long file system scans. The hybrid cloud file storage provides a single namespace, exposed across protocols, that provides a vast number of users centralized access to files, whether the Data is on-prem, multi-site, or in the cloud.

Qumulo's software provides a modern, distributed file storage system developed from the ground up to run on commodity hardware or natively in the cloud. The key benefits include ultra-fast performance, efficient and dense smart storage solutions. As NVMe storages are super-fast, they provide extremely low latency application response. Also, it ensures there is no vendor lock-in based on industry-standard components.

Qumulo's Active Archive Storage provides instant access to all your data. It gives you the nearline performance with the economics of archive, all in a dense form factor. It is one of the densest drives on the market. It offers linear scaling to PBs of storage. It has a dense, sleek form factor and offers cost-efficient archive storage with fast, simple access to Data.

It is essential to anticipate future needs in today's rapidly changing world and deliver advanced capabilities. Innovative companies are using Qumulo to modernize their workloads in the cloud—enabling them to scale dynamically to take on projects of any size and onboard teams from any location.

With Qumulo, you can innovate beyond the competition and accomplish what you thought was impossible. Qumulo offers your business to leverage the reliability, simplicity, and scale of Qumulo on AWS or Google Cloud. The cloud allows you to deploy resources where they're needed—on-demand, at a moment's notice. This enables you to take on projects of any size without worrying whether your infrastructure will keep up.

Qumulo lets you run virtually any file-based application at cloud-native speeds on AWS or Google Cloud. No rewriting is required. Building integrated solutions, automating, and managing data services is all possible with Qumulo's file system, which includes APIs for every feature they offer and an easy-to-use dashboard.

Bill Richter is President & CEO of Qumulo, where he brings over 20 years of leadership experience to his role. Prior to Qumulo, Bill was a Venture Partner at Madrona, where he invested in and advised emerging businesses across multiple categories. Before joining Madrona, Bill was President of the Isilon Storage Division of EMC, where he grew the business to $1.5 billion in annual revenue in 2014. After Isilon, Bill served as COO of EMC's $4 billion Midrange Storage business. He holds a BA in Business Administration from the Foster School of Business at the University of Washington.

"Qumulo is on a mission to liberate customers from antiquated file storage systems sold by vendors stuck in the past. Everyday, we help our customers scale, save time and money, and get to the cloud. We're in the customer delight business. As simple as that sounds, we didn't come up with the concept. We just listened to what customers wanted."