Reaching Beyond with CHC Helicopter 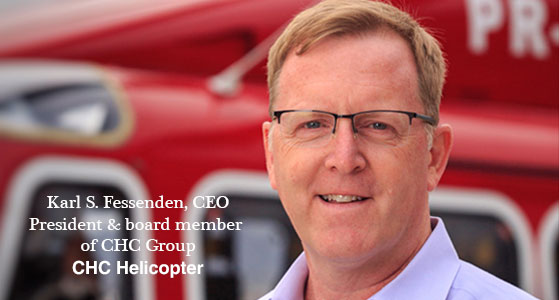 Reaching Beyond with CHC Helicopter

Ever since the evolution of mankind, humans have yearned to travel. As civilizations developed, the ability to access new locations became an integral part of trade and further explorations. Today, with the advent of globalization, the world has become more connected, which creates a need for better modes of transport.

In the past century, airplanes and helicopters became immensely popular for their quick and safe access. For instance, helicopters can be used as flying ambulances to carry patients or can be loaded with water to fight large fires. Military forces use helicopters to move troops and get supplies to ships, air-sea rescues, patrolling, reconnaissance, the evacuation of the wounded, and the transportation of personnel and equipment into battle.

CHC Helicopter, founded in 1947, is one of the early pioneers in air transportation. They reach beyond to provide safe, reliable, cost-effective helicopter service in some of the most remote and challenging environments around the world. CHC Helicopter comes with not only extensive experience but also a dedication to safety, a reputation for quality, and innovation to help customers reach beyond what they thought possible.

How it all started…

CHC traces its roots back to Carl Agar, A.H. “Barney” Bent, and Al Stringer, the three Canadian Air Force veterans who founded Okanagan Air Services on April 18, 1947. Okanagan Air Services took delivery of its first aircraft in August 1947. By 1950, the company was supporting the world´s largest year-round helicopter-supported construction project located in northern Canada and was one of the largest and most experienced helicopter operators in the world.

With values of simplicity, agility, collaboration, and innovation, CHC has earned a brand heritage over the years. CHC Helicopter is a global leader when it comes to transporting customers in the oil and gas industry, supporting search-and-rescue and EMS contracts, and providing maintenance, repair, and overhaul services.

CHC has a strong commitment to safety. “We put safety first in everything we do and empower our employees to stand up and act whenever they see anything that needs to be addressed,” says Fessenden, the CEO of CHC Helicopter. A company that has been providing transport solutions for 70 years has redefined global standards with its latest technology and training practices. And everything it does is to ensure that customers reach beyond their limitations and get where they need to be safely and efficiently.

With financial flexibility, CHC is able to invest in the latest aircraft models and technology upgrades across its fleet. This further ensures that everyone on board stays safe, no matter what! Fessenden further adds, “While we seek to be as efficient as possible, we believe safety is the core of what we do and we are dedicated to taking care of our passengers and people.”

Also, the employees know the important role they play in taking care of CHC’s customers and each other. They are all empowered at all levels to support CHC’s safety culture.

CHC believes that experience and expertise are its biggest assets. In addition, the company also states that people are an important factor for its growth. The people at CHC have helped it to manage a number of challenges and keep its operation running safely and effectively. CHC would not be positioned for long-term success today without the best team in the rotorcraft industry.

CHC is proud of its 70-year heritage. However, it is not the one to take future for granted. Regardless of what happens next in the energy market, it wants to be able to turn a profit and ultimately benefit greatly from any recoveries in a cyclical market.“After 70 years of success, our goal is to continue to lead helicopter transport in not only offshore transport, search and rescue and EMS, but also in other emerging markets as well,” the CEO notes.

The driving force of CHC Helicopter

Karl S. Fessenden is the CEO and President of CHC Helicopter and a board member of its parent company, CHC Group. He holds a degree in Mechanical Engineering and a Master’s degree in Business Administration and Management and a track record of strong leadership for over 20 years. Fessenden has successfully led multiple global-service business units at GE Energy and GE Aviation in building industrial-services businesses, as well as process discipline around resource and capital allocation.

“Our mission is to take care of our own people and our passengers in everything we do.”