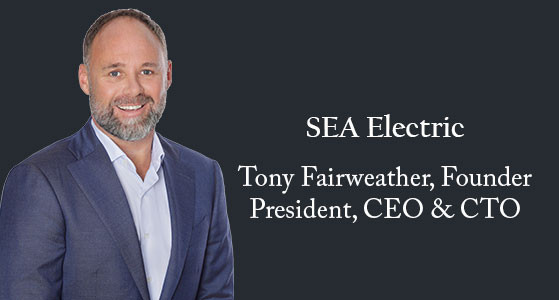 The world pollution level has been rising and there are many concerns about it. The unorganized and unplanned use of natural resources has depleted and also posed a serious survival threat for our planet. With the rise in Global warming, we have seen weather changes that are slowly changing the demographics, sea level is rising, oxygen levels depleting.

Several companies and governments have now started thinking about electric vehicles, which can significantly reduce the carbon footprint of our planet. There are companies like Tesla who make electric cars but are limited to the elite class only. Several other companies are doing their research. But it has been a long time now and we need a majority of vehicles capable to run on electric.

One such company is SEA Electric, which originated in Australia, but now headquartered in Torrance, CA, and has developed a 100% electric commercial vehicle drivetrain system (known as SEA-Drive®). SEA Electric is producing both CBU models as well as electrifying some of the globe’s most well-known commercial vehicle brands.

It has an aim to make the electric vehicles affordable and common to the masses. It wishes to produce low-cost vehicles whose total-cost-of-ownership is now more economical to procure electric commercial vehicles for urban applications than their diesel equivalents. It has been able to achieve a range of 180 miles (300km) for its few models and with affordable pricing and performance; it wants to bring the global EV revolution.

SEA Electric has partnerships with companies around the world to offer 100% electric power system solutions through commercial licensing arrangements. It provides the world’s most cost-effective and electric power-system for the commercial vehicle market with in-built flexibility to allow for regular hardware and software upgrades, hence future-proofing your purchasing decision. We interviewed the multitalented and innovative entrepreneur, Tony Fairweather, who is also the founder and President of SEA Electric.

Q. What safety measures has SEA Electric taken during the pandemic?

With offices and employees in Australia, New Zealand, Thailand, and the USA at present, we were required to implement a range of initiatives to meet local guidelines. Todate, we have navigated the pandemic without any employees contracting COVID 19 and without any substantial operational downtime.

Q. “Leadership is the art of giving people a platform for spreading ideas that work.” What is your take on this?

I think it’s deeper than that. People need ownership and thrive on accountability. In a dynamic, market-leading, technology business like SEA Electric, it is vital for our success that we foster this culture.

That it is possible to both create commercial value and to have a positive impact on the world in which we live.  Removing highly polluting commercial vehicles from our environment is at the forefront of SEA Electric’s core values.

What is the scenario of the automotive industry? How is SEA Electric making a difference?

By producing zero mission commercial delivery vehicles that perform the task required by our customers, at a price point they require, to expedite the uptake in this important segment.  For each zero-emission electric truck we deliver, we have the same environmental benefit of removing 20 engine-powered cars from the road.

Q. Enlighten us on your diverse offerings.

SEA Electric’s power-system range enables any current model urban delivery vehicle to be powered as electric from new, rather than a polluting engine. This includes delivery vans, home-delivery trucks, refrigerated vehicles, elevated work platforms, and large garbage trucks - to name but a few. All zero-emission and available now.

Tony Fairweather is the founder, President / CEO/CTO of Sea Electric. After completing a Mechanical Engineering Degree, Tony entered the corporate world with Coca-Cola Amatil (CCA), during which time he completed a Master of Business in Enterprise Innovation, which initiated his passion for entrepreneurship. After 5 years with CCA, Tony moved to Management Consulting, during which time he completed a Master of Business Administration (International Business), to obtain the qualifications he believed are required to be successful in a global environment. An opportunity to head business units within TNT Express (in two states) was taken up, which provided full P&L responsibilities, and invaluable IR and HR experience. After 4 years, Tony left to start his first business, which has evolved into SEA Electric over the ensuing years.