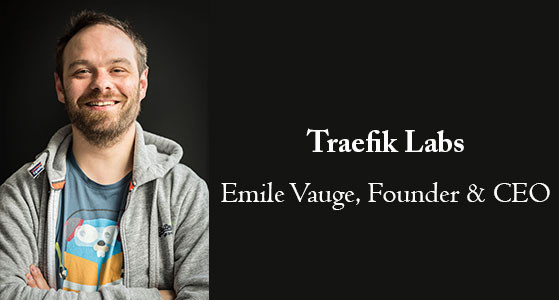 Traefik Labs was established by Emile Vauge in 2016. But back then the company was floated by the tech wiz as Containous. He created Traefik as a side project; something he felt could help him work better. At the time, there was no reverse proxy that was good at managing the complexity of microservices at cloud scale. This gave him the idea to address the pain point.

A lot of interest was generated around his idea and project. A huge community gathered around the project soon, and within a few months, he built Containous around the project. And the rest, as they say, is history. “We created Traefik because we needed application networking that could handle the complexity and scale of the cloud. It turned out that a lot of other people wanted the same thing: open source networking built from the ground up for DevOps and microservices. Since Traefik is at the heart of everything we do, it was natural to make it the heart of our identity as well,” said Emile Vauge, Founder and CEO of Traefik Labs.

The San Francisco-based company subscribes to a development model that is based on open source solutions. It strongly believes in community-backed open-source software along with enterprise-grade consulting. This provides their customers the confidence they need to focus on their business.

Recently, Traefik Labs recorded an astounding 2 billion downloads and is on the top 10 most downloaded projects on Docker. The company continues to remain focused to bring the first cloud-native networking stack for dynamic infrastructure to simplify cloud and microservices. Traefik Labs has 30,000 stars on GitHub with over 500 people contributing to its open-source projects today. “What the wire is to electricity, we want to be for the cloud,” said Traefik Labs founder and CEO Emile Vauge. “Right now enterprises need many different tools to manage application connectivity, from ingress control to service mesh to global load balancing. We’re creating a simple, unified stack that can be used to manage the entire network across data centers, on-premises servers, and public clouds all the way out to the edge.”

The company is trusted by some of the world’s biggest brands, including Conde Nast, eBay Classifieds and Mailchimp. “I wish all networking software were designed as well as Traefik,” says Pierre Bourgeois, DevOps engineer at Worldline. “With Traefik, I don’t waste time configuring settings. Traefik finds my services and configures itself. In terms of usability and performance, its head and shoulders over any popular solution I’ve seen.” Traefik Labs announced $10M in Series A funding in January 2020, led by Balderton Capital, with participation from Elaia and 360 Capital Partners.

eBay Classifieds is a platform which has a containerized set of microservices deployed to the cloud to take advantage of the scalability and availability offered by cloud resources. Its platform is quite large, hosting and managing hundreds of microservices. “We were looking for both a load balancer and an API Gateway that is easy to configure, scale, and secure,” said Wim Fournier, Site Reliability Engineer at eBay Classifieds Group (eCG).  His team needed a solution that would let them handle routing external and internal traffic flow with no bottlenecks or scalability issues. eCG found Traefik was very well suited to natively support its requirements.

“Traefik gives us flexibility and avoids any vendor lock-in,” Wim said. Traefik offered an all-in-one product that was easy to use and configured swiftly. The solution was perfect for eBay Classified’s scale and traffic. Traefik also integrated with core technologies of eCG, including Docker for containers, Nomad for orchestration, and Consul for service configuration management.

Emile founded Traefik Labs in 2016. Prior to founding Traefik Labs, he was a DevOps Consultant at Zenika. Before that he was the Project Lead Developer at Lyra Network, a trusted payment partner for global commerce. From 2006 to 2009, Emile was the Lead Developer of Airbus. He has also worked with Nortel as a Developer.

“The simplest, most comprehensive cloud-native stack to help enterprises manage their entire network across data centers, on-premises servers and public clouds all the way out to the edge.”

“Traefik Labs’ mission is to bring the first cloud-native networking stack for dynamic infrastructure to simplify cloud and microservices adoption journey for all enterprises.”

“Traefik Labs’ development model is based on open source solutions.”