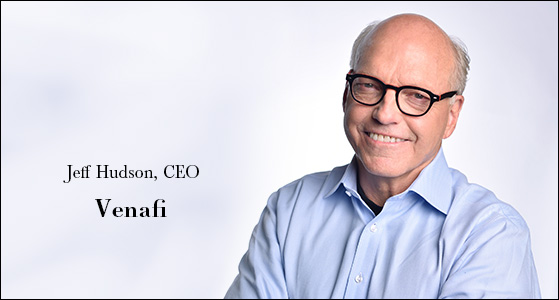 The number of machines in organizations continues to rise. But every year businesses spend billions of dollars protecting the identities of humans, while little is done to protect machine identities. Unfortunately, malicious actors online are exploiting this gap in security.

Venafi was the first to identify this problem and created the technology to protect machine identities. The company is one of the best cybersecurity companies around today. We talked to Jeff Hudson, the CEO of Venafi, to learn more about Venafi and how they protect the security of many Global 5000 companies.

Tell us about Venafi and its story.

Venafi’s predecessor company was founded by Russell Thornton and Ben Hodson after they recognized the importance of security for a consulting project. The cofounders incorporated the company as IMCentric in Washington State on October 26, 2000.

In early 2005, the company’s name changed to Venafi: a word created by combining two Latin roots—Vena (vein or root) and Fides (trust or faith). Venafi secures the root of trust—machine identities, including cryptographic keys and digital certificates. I joined the company in October 2010, and the company moved to Salt Lake City, Utah in 2013.

As a leader in the cybersecurity industry, Venafi is a technology pioneer. We defined the Machine Identity Protection market, and our platform protects the largest, most sensitive networks in the world.

Could you tell us about a formative project? Share the experience.

Back when Venafi was just getting started, a very large European bank asked us to accomplish a specific task by a certain date. If we did so, they would pay us half a million dollars. However, we found an intermittent bug as the deadline approached.

Many organizations would have still shipped the solution despite the bug, saying they would fix it in the next version. However, that’s not how we wanted to run Venafi. We told the bank about the bug and explained that we couldn’t ship the product. Our customer was completely understanding, asked us to ship anyway and paid us. They never experienced the bug, and our next version fixed it.

Ultimately, they appreciated our honesty and transparency, and these values are something we try to put into practice every day.

Can you talk about your products and services in brief?

Venafi secures machine-to-machine connections and communications. The modified sentence should read: We protect machine identities by orchestrating cryptographic keys and digital certificates for SSL/TLS, IoT, mobile, SSH and more. Venafi provides global visibility of machine identities and the risks associated with them for the extended enterprise—on-premise, mobile, virtual, cloud and IoT—at machine speed and scale. Venafi puts this intelligence into action with automated remediation that reduces the security and availability risks connected with weak or compromised machine identities while safeguarding the flow of information to trusted machines and preventing communication with machines that are not trusted.

Do you have any new product/service ready to be rolled out into the market?

Next-Gen Code Signing provides information security teams with comprehensive visibility and detailed intelligence about all aspects of code signing operations, including who has signed what code with which certificate, who approved the request, and when each action occurred. Using the detailed intelligence gathered, Venafi Next-Gen Code Signing delivers compliance and audit reporting across all code signing activities.

How does your company contribute to the global IT/cybersecurity platform at large?

Venafi invented the technology that provides the visibility, intelligence, and automation needed to protect machine identities in the world’s largest, most security-conscious companies.

Jeff Hudson is a true pioneer with over 25 years of experience in leadership and management in information technology and security management. He has been a key executive in four previous successful high-technology startups. Before Venafi, Jeff was the CEO of Vhayu Technologies Corp which was eventually acquired by Thomson Reuters. Prior to Vhayu, he was the CEO and co-founder of MS2. He started his career with IBM.

He is also a prodigious speaker who has talked worldwide at numerous technology and business conferences. He also contributes regularly to business and IT security publications including Forbes, New York Times, and Wall Street Journal.

He earned his BA in Communications at the University of California, Davis.

“With dozens of patents and hundreds of customers, Venafi protects the largest companies across the world.”