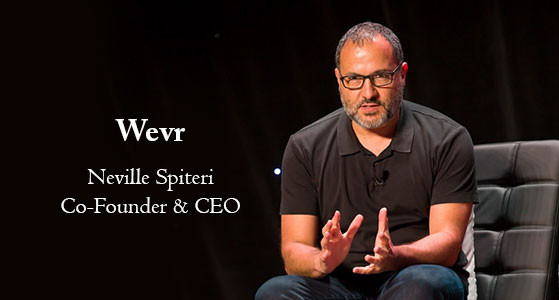 Immersion is increasingly shaped by software. Software enables new methods to create and express stories, gameplay, characters and worlds. Beyond projecting images on a screen or the playback of sounds, delivering immersion and presence requires the integration of input and response systems only possible with software.

Headquartered in Venice Beach, California, Wevr’s first simulation was an interactive story about the oceans as a web of interconnected life. Named the “TheBlu,” it debuted in Times Square New York in May 2012, as an interactive real-time simulation with digital fish displayed on the giant Nasdaq screen and swimming from device to device on people’s phones. It was a multiple award winning global hit “theBlu” remains one of the most popular VR titles to date.

Those were also the early days of the Oculus Kickstarter campaign. Wevr has worked with the Samsung GearVR since its first prototype in early 2014 and theBlu was an initial launch title. In November that same year, Wevr was the first company to get access to Valve’s VR HMD prototype which was affectionately called the “-1 Dev. Kit” that eventually became the HTC Vive. Wevr’s “theBlu Encounter” would be the first demo shown on the Vive at HTC’s launch event in Barcelona in March 2015, as well as at Valve’s Game Developers Conference unveiling in San Francisco later that month.

The company’s Emmy finalist for Outstanding Innovation in Interactive Media, Gnomes & Goblins Preview, is a creative collaboration with Jon Favreau (Iron Man, The Jungle Book, Lion King) with a 97% rating on Steam. Wevr has also produced ground breaking interactive experiences with creative geniuses including Reggie Watts, Run the Jewels, and Deepak Chopra, and has earned partnerships with Samsung, Time, NYT, Vulcan, Google and others. Wevr is included on Fast Company’s list of "Top 10 Most Innovative companies in AR/VR in 2017".

Over the last several years, Wevr has developed its own toolkit of best practices to deliver presence with zero nausea for the full range of devices from mobile to room-scale VR and LBE. And it has created numerous experiences across devices and formats.

More recently, the company partnered with Vulcan (the late Paul Allen’s company) on the Holodome project - an immersive projection format enabling groups of up to 10 people at a time to step into a dome and have a shared immersive experience together.

Wevr truly believes that immersive computing is the next generation platform medium over the next decade, which will have real-time massively scalable simulations, with AI characters co-inhabiting persistent worlds running across a range of rapidly advancing displays and wearable gear.

Wevr’s team was born from the use and development of software to create great stories and experiences. The company sees the world as a balance and blend of powerful storytelling coupled with technology. They push story and core emotional ideas and realize them by engineering magical software, rendering these stories in real-time for its users. This is Wevr’s DNA.

Neville Spiteri is co-founder and CEO of Wevr, the leading virtual reality studio and distributor. As one of the top software engineers and creative executives in the industry, Neville has been at the forefront of interactive storytelling throughout his career, directly influencing the future of virtual reality.

Prior to founding Wevr, Neville served as producer and senior development director at Electronic Arts where he began to explore the world of interactive storytelling while leading the technology and production teams for five years. Earlier in his career, Neville was the director of product management on the ground floor team at EMC|Greenplum (now Pivotal), where he first met his Wevr co-founders, Anthony Batt and Scott Yara.

“The company’s  world class leadership team is comprised of repeat successful venture-backed entrepreneurs and Academy Award-winning digital entertainment pioneers who have delivered massively successful products including Avatar, The Lion King, Call of Duty and The Sims.”

“Wevr has also produced ground breaking interactive experiences with creative geniuses including Reggie Watts, Run the Jewels, and Deepak Chopra, and has earned partnerships with Samsung, Time, NYT, Vulcan, Google and others.”