Create your own apps with Microsoft's PowerApps 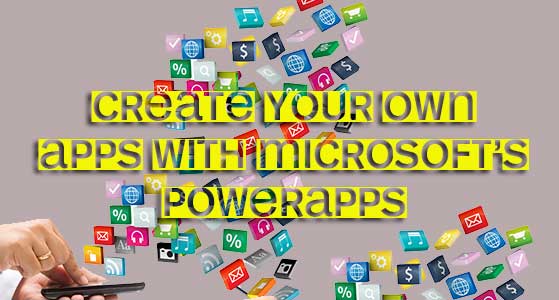 Have you brimmed with jealousy at the amount of money mobile app developers make every month? Your lack of app development knowledge is a dampener and dents your self esteem. Learning it from scratch is time consuming and demands a lot out of your patience and perseverance. Moreover, app developers demand a hefty sum for a single app. Now, Microsoft has come to your rescue by launching a beta version of a service called PowerApps.

Using the service, anyone with practically no software development background can build an app. PowerApps combines a cloud application backend with easy-to-use tools that make creating a mobile app a drag-and-drop affair. It can pull in information from a variety of data sources including Office 365, Dynamics, Google Drive, Workday and other services. Developers can also build connections for PowerApps in their own services if there isn’t a connector already available.

Once the data connection is set up, users can then start building an application interface from one of Microsoft’s pre-built templates, or plug key data into PowerApps and let the service suggest the right designs for their purposes. Those people who have a strong idea for what they want their app to look like can create it from scratch. Once users have built the apps they want, they can then use Microsoft's service to share their newly created tools with coworkers who have the PowerApps application installed on their smartphones.

The system is currently limited to building software that runs inside the PowerApps app on mobile devices, however, so employees won’t be able to push their creations to the iOS App Store or Google Play Store. Microsoft Corporate Vice President Bill Staples said during a press briefing that Microsoft will consider feedback from its customers when determining if the company should make it possible to create standalone applications using PowerApps.

PowerApps is currently available in a limited public beta. Anyone can sign up for an invitation, but Microsoft has a say over who gets to try PowerApps right now.

The selected users will be able to use it for free, and can use the service to create unlimited apps that integrate with up to two cloud data providers. The paid Standard tier allows unlimited cloud data integrations and an Enterprise tier lets users build apps that take advantage of data stored on-premises. The company hasn’t revealed an exact price for the two tiers, but Staples said that it will be sold on a per-seat basis, and Microsoft wouldn't require companies to pay for the cloud infrastructure running their applications.