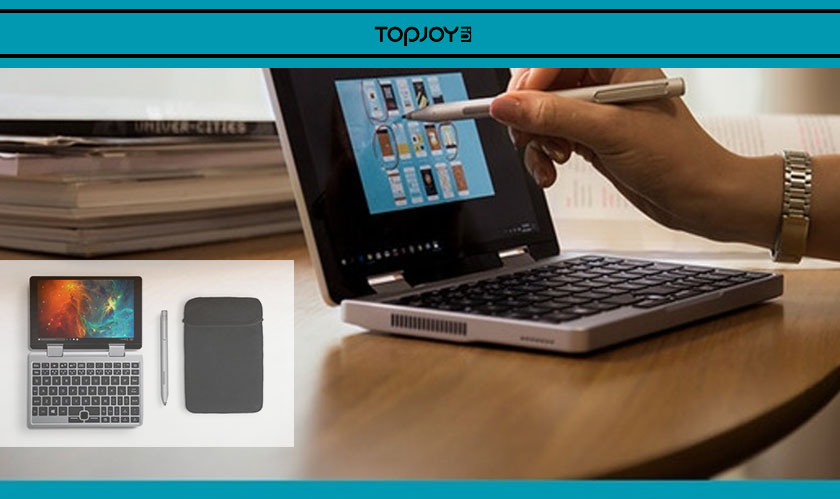 The Topjoy Falcon, a tiny Windows 10 laptop already went four times over its Kickstarter goal. Its success is based on the tiny 8-inch screen that still keeps a full HD resolution.

The mobile or ultraportable laptop features a 360-degree hinge that allows you to flip the 8-inch screen all the way around to turn it into a tablet (but a chunky one). The 2-in-1 laptop is a vast improvement over the 10-inch 1024 x 600 netbooks. It also includes a tiny keyboard and a trackball-style mouse setup instead of a trackpad.

Inside the compact device, there’s an Intel Gemini Lake Pentium Silver N5000 CPU, making it roughly as powerful as the Surface Go. Furthermore, the Falcon comes equipped with an 8GB of RAM and either a 128GB or 256GB SSD. Lined up on the right side of the tiny laptop is a series of connectivity ports and it includes a USB, HDMI, Type-C, microSD slot, and a 3.5 mm headphone jack.

The makers only released a prototype – a pre-production model for review, and there are a ton of minor-to-major issues, which the company said will iron out before the Falcon hits the consumer market. Most importantly, given the small form factor design, Topjoy emphasized the inclusion of active cooling, and up to 8 hours of battery life.

The Falcon Kickstarter has already earned over $280, 000 CAD, and there are two more days left to get it during the campaign.