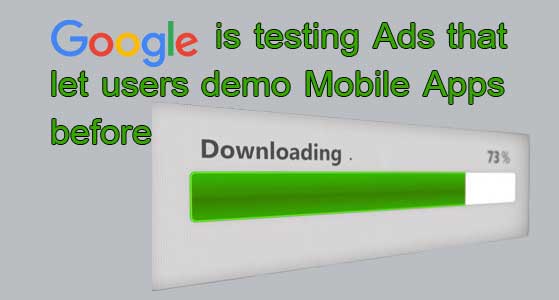 Ever wished you could try a mobile app before wasting time, money and precious data on actually downloading it? Google wants to let would-be users test drive them. Today, Google is debuting Trial Run Ads, which allow apps to be demoed for around 1 minute before downloaded and are meant to increase downloads from people who actually want the app.

"The immersive demo increases the likelihood that an install is coming from someone who enjoys playing the game," according to the blog post written by Google director of mobile ads Sissie Hsiao and product manager Pasha Nahass. "Users get a taste of the game before going through the download process, and the app developer attracts better qualified users who've chosen the game based on their experiences in the app."In an email, a Google spokesman said advertisers will only pay for a click on the install button rather than every time someone tries the demo.

Along with Trial Run Ads, Google also announced an HTML5 ad for interactive interstitial ads, which would allow for a customized user experience tailored to each advertiser's app.

Google says the ads would give advertisers creative freedom to use HTML5 rather than a standard template. Advertisers would be able to employ interactive interstitials to showcase product offerings through galleries and highlight elements of personal branding. In one example, Google said global fashion retailer Zalora utilized the feature to allow users to swipe for an exclusive offer.

"We understand that experiences on mobile need to be made for mobile, and an ad is no different," Hsiao and Nahass said. "We're continually exploring new and better ways to build out interactive formats for the small screen."

Both offerings are still in beta and only available to a limited set of advertisers.

In some ways, these new offerings are a follow-up to research conducted by Google earlier this year, which found that 50 percent of app downloads come through mobile search rather than the app store. The research released in May also found that one in four apps downloaded is never used.