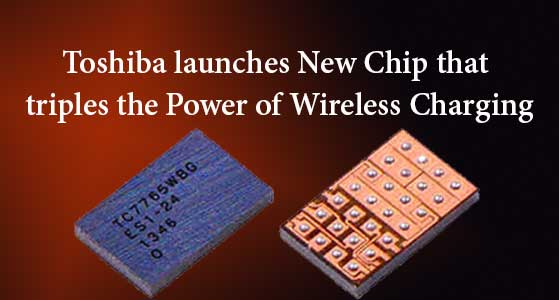 Toshiba America Electronic Components (TEAC) has come up with a solution to this problem. The company recently launched the industry's first single-chip wireless power receiver (RX) that can operate at 15 watts and is compliant with Qi v1.2, the wireless charging standard. The new TC7766WBG chip triples the amount of power that can be received without increasing the chip's size.

"This enables wireless power for subsequent charging of smartphones, tablets and handheld devices at speeds comparable to or, in some cases, faster than conventional wired chargers," TEAC said in a statement.

â€œThe new 15W chip includes all the functions needed to construct a standalone wireless power transfer RX systemâ€, TEAC said. Along with its 15W maximum output power, the RX chip features maximum output current of 1.7 amps and output voltage range of 5 to 14 volts, full protections, and the new Qi Foreign Object Detection functions, which keeps metal objects near a charging device from receiving the electrical voltage. The chip is housed in a WCSP28 package that is 2.4mm x 3.67mm x 0.5mm in size.

"Making a 15W wireless power chip that allows for rapid charging available to our customers in a package with the same footprint as our previous product will help speed the design-in process and help them get advanced charging devices to market more quickly," said Deepak Mithani, senior director of development at TEAC.

Mass production of the chip is expected to begin in spring 2016. Samples of the TC7766WBG wireless power receiver IC will be available by the end of 2015.