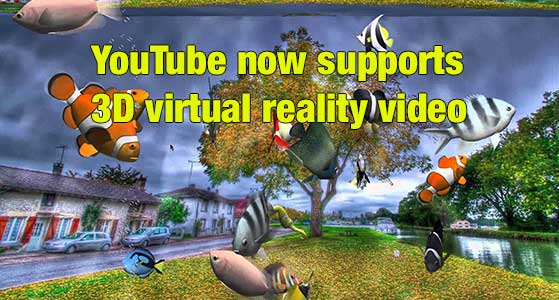 YouTube now supports 3D virtual reality video, Google has announced. It's not the most surprising announcement in the tech year, admittedly: Google had already embraced virtual reality, 360-degree video and immersive content, after all. This announcement merely brings them all together, and makes it possible to make, share and watch 360 videos that also have depth and three dimensions in the manner of most games and other VR experiences.

"Using the same tricks that we humans use to see the world, VR video gives you a sense of depth as you look around in every direction," Google said in a blog post.
The core idea is to give video a sense of true distance and physicality. "Near things look near, far things look far," Google says.

The new videos which include some custom paid-for 'content' by the likes of TOMS Shoes and the latest Hunger Games movie can be seen already via the YouTube Android app, available on Google Play. Tap the new 'Cardboard' icon and you'll be dropped into the video. More and better films will follow though, and with capable cameras coming onto the market it won't just be marketing companies using this tech for long.

In fact there is some better content already, including a 3D VR video of the Apollo 11 Moon landing and Waves of Grace, a VR trip into the heart of the Ebola crisis.

Google also announced that existing YouTube videos will be viewable in Google Cardboard via a new virtual movie theatre, which drops viewers into a sparse, 3D setting where they can pretend to sit back, alone, in a dark place, and watch their chosen video on a distant screen, blinking in the dark. Sounds neat.

"Both of today’s updates make it easier to be there. In some cases, really there," Google said. The new YouTube App can be seen in Google Play.