Forex vs Stocks: Which is the Better Option? 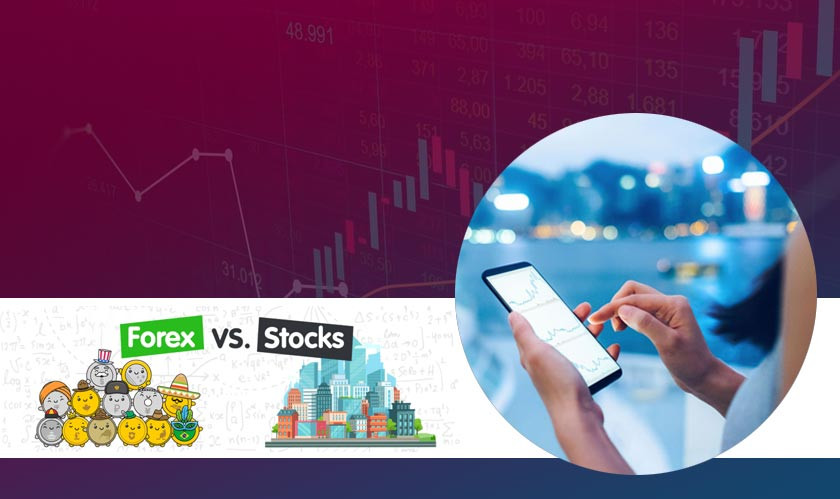 Forex, aka foreign exchange, is one of the oldest rivals of the stock market, and in some areas, forex trading can be a more advantageous choice. Not to be left behind, the stock market also has a lot going for it that puts it ahead of the foreign currency exchange in multiple ways. If all that sounds confusing, then you are already catching on! There are no easy answers to this one, which is why we are about to go in deep and pit the two types of trading, their benefits, and their unique disadvantages against each other to see who comes out on top. With that goal in mind, let’s focus on the prime aspects of trading itself, which should clear out which of the two is better than the other at what.

Every market in existence is influenced by demand, supply, and the differences between these two. However, these are only superficial and generic influences, which are not sufficient to help us get an idea of the complexities involved while trading in stocks and foreign currency. In order to properly decide which of the two markets are more complex to deal with, we will have to determine the influencers of each first, outside of supply and demand.

While buying shares, we haveto remain aware of past present and predicted future conditions of the stock market as a whole, and of course, multiple specific factors about the company whose share we are considering. These factors include but are not limited to:

There is certainly an added level of micro-research involved if you are trading stocks, but in comparison to the complexity of the influencing factors associated with forex, they do seem simpler! To get a better idea of what we mean, go through the following, which are only some of the many factors that may influence the value of foreign currencies.

If you have taken note of the influencing factors stated above, you will notice that they always factor in two nations and not one. Forex trading, by default, involves two national currencies, so many of the factors mentioned may very well have completely different effects on the two national currencies. By now, it should be clear that if you are looking for the less complex trading option, share trading is almost always simpler to keep track of, compared to forex.

There are two ways to look at trading hours and the preference in this respect should be based on the investor’s own perceptions and conveniences.

Depending on the share exchange on which the stocks are listed, there will always be a definite opening and closing hour. So, if you want more control over the opening hours of a market, stock trading is the only option you have between the two. Forex trading is open 24/7, 365 days a week, so you can essentially trade at any time you want, but one man/woman alone cannot possiblymonitor the forex exchangeat all times because of the same. There are ways to mitigate risks associated with this, but they can only lessen the impact of any loss incurred during your offline hours. Once again, the share market proves itself as being a much simpler and more trackabletrading option than forex.

Liquidity in trade markets refers to the speed and ease with which an investor can buy or sell the asset in question. Given that currency is essentially money in different forms and values, the stock market cannot be compared with forex as a whole, purely in terms of liquidity. However, that does not hold universally true for all currencies, and if you wish to enjoy the liquidity advantage forex has over the stock market, you will need to dealinonly the popular currencies, which varies from time to time in their position in the market.However,a few stable currencies such as the Pound Sterling, the United States Dollar, the Canadian Dollar, the Euro, and the Swiss Franc have had excellent liquidity for many years now.

On the other hand, if you end up trading in Iranian Rial or Venezuelan Sovereign Bolívar, they would not haveany better liquidity than the worst ranking shares at that time. However, unlike how a small company can go bankrupt and make its shares lose all value, even the worst-performing currencies are very unlikely to go through that. There are safe bets with extremely high liquidity in the stock market as well because at no point should you have any trouble while trying to buy or sell share units belonging to Microsoft, Amazon, Apple, Facebook, or Visa to name a few.

Volatility defines the same concept across all fields where the termcan be successfully applied. It simply represents some very specific qualities such as unpredictability and the chances of massivefluctuations. In the trades market, a share or a currency with high volatility are assets that are unstable in their value, with an ever-impending chance of either spiking or plummeting without sufficient notice.

All trade markets are extremely volatile, so there are no favorites to pick between them as far as volatility is concerned. It depends on the specific currency, cryptocurrency, or stock that you buy and when you buy it, rather than which market you are trading in. Understand that volatility is exactly what makes some people rich overnight, while others experience the exact opposite end of the financial spectrum!

Taking advantage of the volatility is what every trader hopes to do, but very few succeed on the massive scale that they hope to. The only difference between forex and stocks in this regard is that the factors that may bring about that volatility vary. Geopolitical factors impactlocal currencies far more than they affect local shares, although specific industries and local companies might still be affected in times of great political change or unrest in a region.

Why should trading platforms matter while choosing between forex and the stock market? The platform you choose to trade in should matter becausein order to transact in either of the two, you need to have an account with a trading platformthat deals in your preferred assets first. The next reason is the commission they charge. It may vary depending on the asset class, the specific shares, the specific currencies and, of course, the specific trading brokerage itself. For example,WealthsimpleTrade is a best Canadian trading platform for stock trading, crypto trading, automating investments, investment advice and so much more.However, what makes them truly stand out from the other brokerages is the fact that they do not charge any commission whatsoever, and they have no account minimum limit either.

Considering how much you can save by being able to skip paying commissions on every major and minor trade, the importance and long-term impact of choosing the right trading platform is immense. It makes every big and small profit practically bigger since you do not have to pay a cut of that to the brokerage platform.

At this point, readers should be able to form a decent idea regarding what makes one better than the other to them. Choosing between the two is always a matter of perspective, financial condition, familiarity, knowledge, prior experience, and preference. However, you may not even have to choose one over the other. Sure, you might be more familiar with the stock market than the forex trade, but there aren’t enough differences between the two to make learning it impossible. You can always start small and grow your investments slowly in forex trades while making the morefamiliar sharemarket investmentsyour priority.

Cryptocurrencies are also worth looking into, especially since bitcoin has once again revealed why it was and still is the king of volatile currencies. Aside from that, there’s a lot more to crypto trading than just bitcoin, which most of us are not even aware of, including a host of lesser-known alt-coins you might not be familiar with.