Apple Hermes Watch to be launched in India on November 6

Apple Hermes Watch to be launched in India on November 6 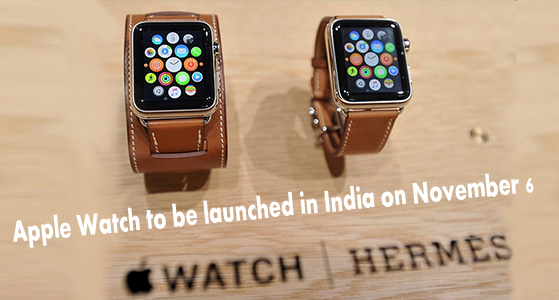 Apple and Hermès have introduced Apple Watch Hermès, a new collection of Apple Watch in stainless steel with finely crafted leather bands in distinctive styles from Hermès, including the Single Tour, Double Tour, and Cuff, while respecting the design and functionality of the Apple Watch. The collaboration merges Apple’s unparalleled product innovation with the heritage, iconography, and craftsmanship of Hermès, creating a unique expression of Apple Watch.

“Apple and Hermès make very different products, but they reflect the deep appreciation of quality design,” said Jonathan Ive, Apple’s chief design officer. “Both companies are motivated by a sincere pursuit of excellence and the desire to create something that is not compromised.

Apple India on Friday said that Apple watch will be finally launched on November 6. Apple hasn’t disclosed the price yet, but it is expected to come at a starting price of Rs 36,999 which is a basic model and price goes up with other variants. In April, cross border e-commerce player Grabmore.in started taking pre-orders of the Apple Watch from Indian customers at a starting price of Rs 36,999.

Grabmore.in usually gets the right price information of Apple products before they are launched in India. So, we can expect the Apple Watch Sport to be priced around Rs 36,999 for the base model. The delay in the launch of Apple Watch can be attributed to the fact that Apple was considering to sell the Watch in jewelry stores too as it falls in the luxury fashion accessory segment while being a gadget primarily.
Apple may also announce the launch of Hermes band with the custom watch face.