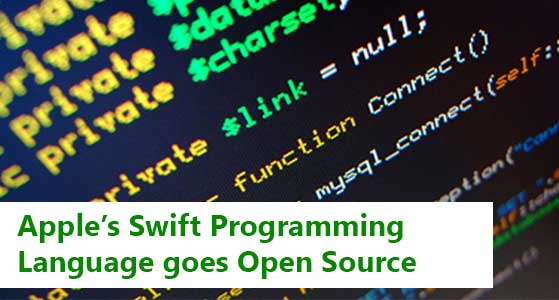 Apple’s swift programming language was released last year. The language gained limited acceptance among coders due to Apple’s imposing watch on its code base. According to Apple community website 9to5Mac, developers have been reluctant to commit to a relatively new language whose code base may disappear at the whim of its monopolist owner. Though it was only introduced in 2014, Swift is the fastest growing programming language in history. According to analyst Redmonk’s Programming Language Rankings, June 2015 report, Swift has “the performance and efficiency of compiled languages and the simplicity and interactivity of popular scripting languages”.

As the language is open source, Apple said, a broad community of developers from education institutions to enterprises could contribute new Swift features and help bring it to new computing platforms.

The Swift open source code includes support for Apple’s iOS, OS X, watchOS and tvOS software platforms as well as Linux and is available via GitHub. Components available include the Swift compiler, debugger, standard library, foundation libraries, package manager and REPL. Swift is licensed under the Apache 2.0 open source license with a runtime library exception, meaning users can incorporate Swift into their own software and port the language to new platforms.

In Swift.org, Apple explains about Swift open source with technical documents, community resources and links to download the Swift source code. “Swift’s power and ease of use will inspire a new generation to get into coding and take their ideas anywhere, from mobile devices to the cloud,” said Craig Federighi, Apple’s senior VP of Software Engineering, “By making Swift open source the entire developer community can bring it to even more platforms.”

The Swift team of the company has now posted source code for the Swift compiler and standard library functions and objects.