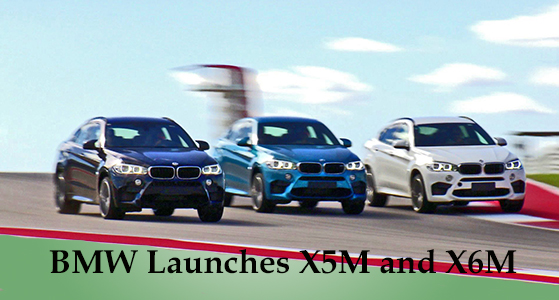 BMW has always been a name synonymous with sporty and high performance automobiles. Driving the point deeper, this German car maker has just launched two new models in the Indian automotive space: the BMW X5M and the BMW X6M, priced at INR 1.55 crores and INR 1.60 crores respectively.

Both these cars are tuned avatars of existing BMW SUVs, the X5 and the X6. Unlike the standard X5 and the X6, the engines in their M versions are proper monsters. A 4.4 liter V8 petrol engine sounds large enough as it is but, the mad scientists at the M Division clapped on two scroll turbochargers (hence the name TwinPower Turbo) to boost the power output to a stellar 567 bhp. It also has a whopping 10 radiators to keep it from overheating! The power is directed to all 4 wheels through an 8 speed, M Steptronic automatic transmission.

There is pretty much nothing that has been left alone by the M Division engineering boffins; both the X6M and the X5M come equipped with stiffened suspension, M Servotronic steering assistance and M Compound brakes that have been designed specifically to withstand brake-fading under hard use. As a result of all this techno-magic, once you engage the launch control and step off the brakes, both these cars can rocket to 100 kph in 4.2 seconds. The top speed has been pegged back to 250 kph.

BMW has not focused solely on performance, though. The BMW X6M and the X5M have BMW Efficient Dynamics which include features such as an automatic engine start/stop, brake energy regeneration and intelligent energy management system as standard to make them as efficient as possible. The best part is that the arrival of vehicles like these new high performance SUVs just go on to show how far the Indian automotive market has come in these past few years. If you are a driver with a sporty bend and your bank account is sizeable, the X5M and the X6M should definitely be considered.